THE IDEALS aka THE OVATIONS 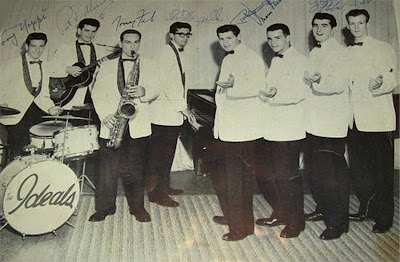 Harrison,New Jersey,1958.Richard Kelly started a group with Paul Omeletski(Bass),Mario Venancio(Baritone) and Gus Ottobre(first Tenor) they are know as The Ideals who had one release on the Cool Label_Do I Have The Right/You Won't Like It.

To Listen or Download_Do I Have The Right.
Please visit; http://www.box.net/shared/02qr2aifq1 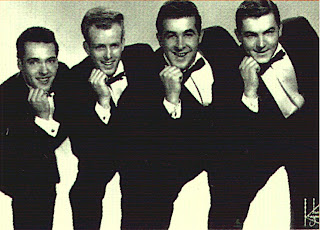 The next year Paul Sansone replaced Omeletski and the group name was changed to The Ovations and signed for Epic Records but without recording in Epic the group moved to Andie Records and Recorded in March of 1960_Whole Wide World/My Lullabye.
In September of 1961 Epic release two Ovation's songs they recorded as demos in t 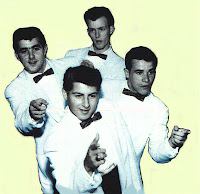 he days of Epic contract_Oh What A Day/Real True Love.After Andie and Epic recordings the owner of Old Town Records Hy Weiss purchase some demos songs of the group and made in the subsidiary label Barry Records another release with an alternative version of_My Lullaby and the_Oh What A Day song under the tittle of_The Day Well Fell In Love.
Finally the group moved to Capitol and recorded_I Don't Wanna Cry/Loneliness Never Entered My Mind. without success why this record was released in the same days of a new Capitol group The Beatles.

Listen or Download The Ovations_Loneliness Never Entered My Mind.
http://www.box.net/shared/c1dba2jp3d
Posted by Whitedoowopcollector at 1:00 AM

RICHARD KELLY....WHAT A VOICE!!!
HE'S GOT TO BE ONE OF THE BEST WHITE DOO WOP LEAD SINGERS OF ALL TIME. I REMEMBER HEARRING "I DON'T WANT TO CRY" PLAYED ON THE OLD 60's NEW JERSEY BASED "DANNY STYLES RAIDO SHOW".
IT'S A SHAME HE HASN'T BEEN INVOLVED IN ANY CURRENT NEW YORK/NEW JERSEY DOO WOP PRODUCTIONS. I KNOW HE'S STILL OUT THERE. A FEW YEARS AGO AT A NEW JERSEY FLEA MARKET I FOUND A FAIRLY RECENTLY PRODUCED ALBUM BY "RICHARD KELLY & FRIENDSHIP". THE MATERIAL WAS NOT DOO WOP BUT THE VOICE & HIS PICTURE SEEM TO BE THE SAME RICHARD KELLY WHO RECORDED
ALL THOSE VOCAL GROUP TRESURES.
C'MON NEW JERSEY....ANYBODY SEEN RICHIE!!!