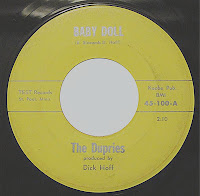 Their name were taken from an altered spelling of three sisters surname. in 1965 singing in many shows in the Wisconsin area and local Dj and producer Dick Hoff aka Dick Hiliday co-wrote the song_Baby Doll. for the group.

They recorded this in May, 1965 in the St. Paul, Minesota label Test Records and were re-released the next month in the Buffalo,NY label, Thunderbird Records with the B Side_Kissy Face.

The next year the girls recorded on the Test label as CANDY & THE CORALS the sides_I Should Have Loved You More/I Know.
Posted by Whitedoowopcollector at 1:36 AM

I CAME OF AGE IN THE 50S LISTENING TO DOO WOP AND EARLY R/B MUSIC THRU STATIONS LIKE WLAC & WDET. THEN LIFE INTERFERED AND I HAD TO GO TO WORK. I AM NOW FREE AGAIN AND ABLE TO ENJOY THE PLEASURES I MISSED ALL THOSE YEARS. AFTER RESEARCHING THE WEB FOR MY MUSIC MEMORIES I AM AMAZED AT THE AMOUNT AND ARTISTS I HAD NEVER HEARD OF IN MY IMPRESSIONABLE YOUTH.