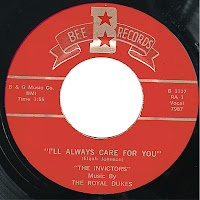 The Invictors were an interracial group from Reading,Pennsylvania formed by black members Raymond Edwards and Barry Boswell with white members Bobby Rohrbach and Bill & Gene Yuhas.

In 1961 Raymond Edwards leave The Silhouettes of_Get  A Job. fame and form a new group with Barry Boswell(2º Tenor with the recent disbanded group, The Honey Bees on Bee Records),Bobby Rohrbach and brothers Bill and Gene Yuhas (Bill before singing with The Royal Dukes, see in this blog)

They choosen the name The Invictors and recorded two tunes_I’ll Always Care For You/I Don’t Wanna Go (with Gene Lead on the A Side and Edwards on the B Side, this written by his daughter). with music by Bill’s prior band The Royal Dukes.
These sides were released in late 1961 in the Bee label located at Barbour’s society cleaners on Schuykill avenue in Reading and owened by Grover Barbour and Russ Golding.

Without success Bobby Rohrbach leave the group and this recorded some demos at Pat Farraro’s studio as_Carrie Lou/My Dream Girl/Goodbye To Love.

In 1963 the label released the side_Carrie Lou(Lead by Boswell) with the B Side_Give Me Your Heart. by an unknow group under the group name of THE TERMITES.

The group singing now as The Termites by a brief time but without made another recording disbanded during 1963.