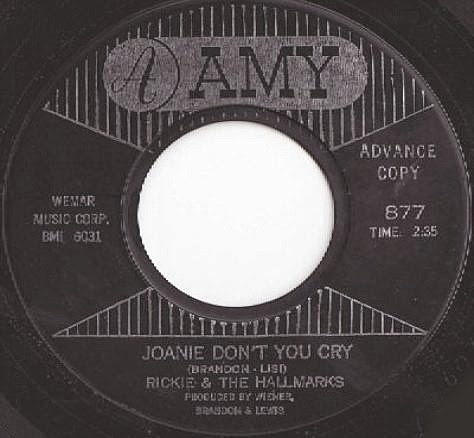 In 1959/60, 12 years old Ricky Lisi formed in Woodside, NY the vocal group know as The Pharo’s, they cut  the demos_Gloria/Lorraine/Sunday Kind Of Love. and broke up.

In 1961 Ricky with Bixie Boyle,Tommy Oliveri, Tony DeFeo and Beverly Warren formed The Hallmarks (name took from the Skyliner’s album) in Sunnyside, Queens.

The group were discovered by Tony Powers who work with Leiber & Stoller and Ellie Greenwich, the group auditioned with the sides_It Was Me Yesterday(Bev on Lead)/Like A Million Tears (Ricky on Lead).

They likes the voice of Bev and offered to record these sides without the group (finally released by Bev in the United Artist label in 1962) and give to the group a work by a brief time as a studio group.

In 1962 Tony and Tommy left and were replaced by Dennis McMahon and Jack Scandura and add “Rickie” to the group name.

Recorded the demos_This I Swear/When I Fall In Love/That Lucky Old Sun/My Man In The Moon. and signed with Wermar Music owened by Johnny Brandon who recorded two news sides of the group(with Paul Simon on the guitar)_Joanie Don’t Cry/Wherever You Are. (A Side from the Delight’s tune_Mary Don’t You Weep).


Johnny send the master to Amy Records who released the sides in 1963 without success, the group work in their new song_Don’t Go Now. but broke without made another recording.

Ricky work as a staff writter for Wemar Music and recorded in 1963 with the back up of The Concords the song_Don’t Go Now. on the Roulette label also this side was add to the B Side of The Stageands release_Hello Dolly. as_You Started It.

In 1964 Ricky and Jack Scandura with members of  The Concords back up to one female lead as Lisa & the Lullabies on the Coed label.

Rick,Jack and Beverly(see The Brentwoods in this blog) continue in the music bussines for many years and singing in many groups as The Blendaires on Arcade Records in 1977.