Who is Joe Cash? 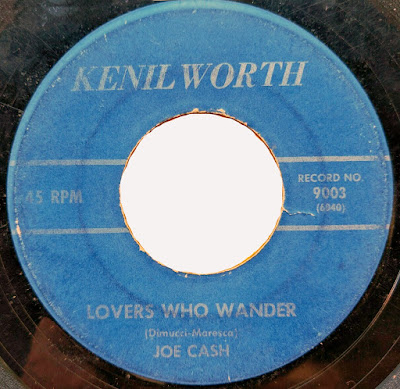 Surely a record well known by the followers of Dion DiMucci, but perhaps not so much by fans of doo wop music, This is the story of this recording ...

Spar Records was founded in 1961 by record men Alan Bubis and William Beasley. They had been partners in the Tennessee and Republic labels in the 1950s and had eventually gotten into record distribution as well. The Spar imprint was soon followed by budget labels Giant, Kenilworth, Caravelle, Tunes For Tots and Country & Western Hits.

Buzz Cason of the Casuals with Bobby Russell in the mid-60's; playing, singing and writing songs together and apart. Buzz and Bobby worked for Spar and had their own versions of the hits of the day released, to cut a share of the song profits.

In 1962 they recorded (Bobby on lead) for the Kenilworrh label the Dion DiMucci song "Lovers Who Wander" released under the fictitious  name of Joe Cash.