THE BOULEVARDS_Chop Chop Hole In The Vall 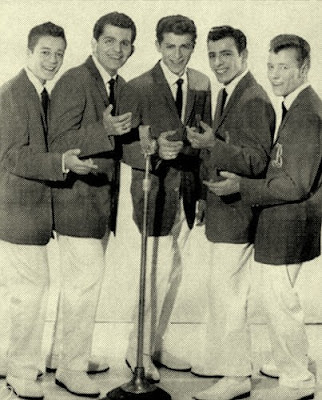 In 1959 the group recorded for Jerry the sides_Dolores/Chop Chop Hole In The Wall. finally released in the Everest label.
From their recording session The Boulevards have unreleased sides as_A Place In Your Heart,Angel,Don't Cry,You Better Admit It,Jezebel,Heavenly Father and_Glory Of Love.

Un 1960 an Akron,Ohio group know as The Fascinations send a tape to Jerry with the songs_Midnight /Doom Bada Doom. Jerry signed the group,polished the songs with some strings and send to Eddie Rasbaum for release on his label Sure Records(see in this blog).

The recording failed on the charts ,the group return to Ohio with the exception of their Lead singer Jordan Chistopher who with members of The Boulevards recorded as Jordan & The Fascinations (see in this blog).

Posted by Whitedoowopcollector at 7:59 AM