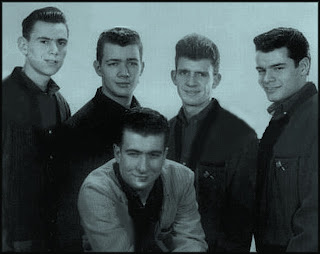 In 1959 Joe Walsh with Lester”Les Ledo”Lopez,Lou Bonini,Bobby Fava and Danny Conboy started a vocal group in Manhattan,NY under he name of Les Ledo & The Consorts(a name that don’t liked to all the members).
An early member of this group was Jay Black later of Jay & The Americans. 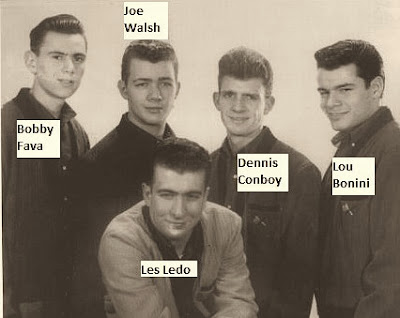 The group singing in record stores,school parties and work as background singers for local artists and finally signed with a small label,Nita Records where recorded in 1959 the sides_Nina/I Got Me A Sweetheart(in the recording session at the famous Brill Building were present Dion & The Belmonts and as one of their members was unable to singing his part,the rest of The Belmonts ask to Joe what singing tenor at_A Teenager In Love.

Without success the group auditioned for Jim Gribble who managed white groups as The Mystiscs or The Passions,he liked the group but no the Ledo’s voice and offerd recording the group without Ledo (this began a solo career).

The rest of the group signed with Jim with Lou Bonini (now as Nick Marco) as their new Lead and recorded two sides_Little Boy Lost/Would It Hurt You. Jim acretited the songs as by Nick Marco & The Venetians (see in this blog).

Posted by Whitedoowopcollector at 12:36 PM

Les Ledo also recorded under the names Jimmy Lee (on ABC Paramount) and Russ Damon (his son's name) for Laurie and other labels. By the late 1960's, he'd revert back to Les Ledo and co-partner as a songwriter with Edna Lewis, who was formerly known and successful in her own right as Allyson R. Khent since the late 1950's. The two would produce a tribute album called WALDEN, dedicated to the writings of Henry David Thoreau. The studio group (called The Nature) included Ledo, as well as featuring Denise Ferri who was/is a member of the Delicates with Peggy Santiglia and Arleen Lanzotti in the late 1950's-'60's.