LITTLE JOEY & THE FLIPS_Mystery Of The Night 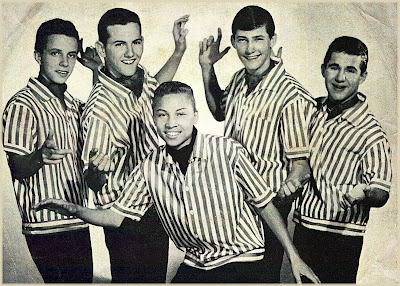 Group from Upper Darby,Philadelphia formed in 1960 by seven guys from a School chorus in this time they are know as The Montels and then The Elads and their Lead singer was Jimmy Dilks( of The Clientelles,see in this blog) this formation recorded to demo_African Twist. this is the earliest form of_Bongo Stomp. 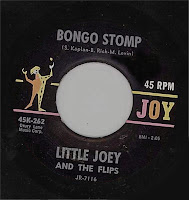 In 1962 the group were a quintet and consisted of Jeff Leonard(Bass),Johnny Smith(Baritone), Joey Hall(Lead),Jimmy Meagher(2nd Tenor), and Fred Gerace(1st Tenor) .They now have as managers to Sky Kaplan,Marc Levin and Barry Rich and a new name Little Joey & The Flips.they re-recorded(with the help of Jimmy Dilks in the falsetto part) the demo_African Twist.as_Bong Stomp(inspired in the Dovell's Hit_Bristol Stomp),but this song was quickly rejected by Swan,Chancellor,Newton and Cameo-Parkway Records.the managers present the demo to Eddie Joy owner of Joy Records he liked the song and released this as single in 1962 with the B side_Lost Love.

-Bongo Stomp.have a big acceptacion and the group have great live and TV perfomances on the east coast. 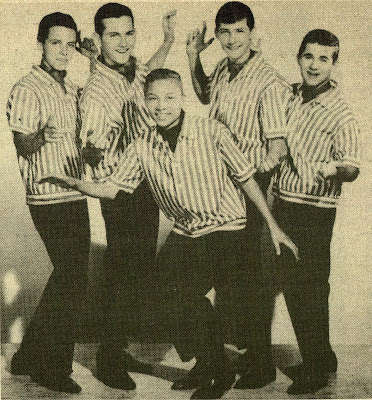 The next recording on Joy records_Bongo Gully/It Was Like Heaven.was released in late 1962 in the same days of Dovell's_Hully Gully Baby.and with little promotion the song failed in the charts.the group broke with their managers and Joy Records and call to the doors of Cameo-Parkway Records where they recorded in 1964 as Joey & The Flips the sides_Fool Fool Fool/The Beachcomber.

It was now 1965 doo wop groups were history and Joey & The Flips gigged as studio band for TV for over two years but when Jeff Leonards is recluted for the Vietnam war the group broke up.
In 1976 Monogram Records released one single with two 1962 unreleased sides of the group_The Mistery Of The Night/Hot Rod. 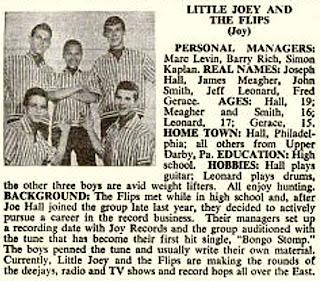 Also is know the existence of another recording on Joy Records of a guy named Joey from 1960_Our Own Little World/My First Love Letter.considering the record date 1960 two years before_Bongo Stomp. is most definitely no one of their recordings.this is a male singer with a female chorus.