THE TASSELS_The Boy For Me 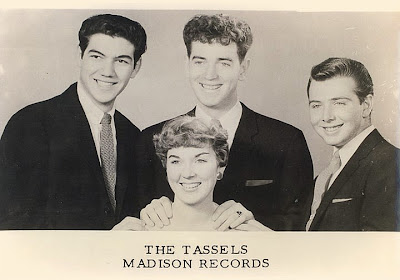 Joe Intelisano was a senior at New Jersey Passaic High School when he heard through a friend that a guy from Clifton was looking to form a vocal group.This is how Joe met John Gaudet they decided to search for a third person at Pope Pius High School,they found Leo Joyce the guys felt satisfied with their sound but still wanted to add a fourth voice.They recruited Don Michaels also of Clifton.

After of some apperances in local clubs John decided incorporate to his sister Rochelle to the group.for a short time the group was a quintet but Don soon dropped out of the group. The idea for the group first record song stemmed from John and Rochelle's mother,Mary Glen,who had written a lullaby_To A Baby Boy. when they were children but when world war II broke out Mary Glen changed the title to_To A Soldier Boy. 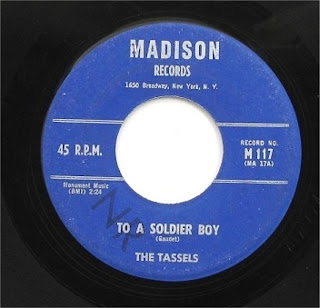 The song was recorded in New York City in the spring of 1959 with the uptempo flip_The Boy For Me(In the style of_I'm In Love by The Ivories) and finally released by Madison Records. Soldier Boy_started the national charts(#55) and The Tassels were instant celebrities they perfomed on American Bandstand and have a national tour.

To Listen or Download The Tassels_The Boy For Me.Please visit;
http://www.box.net/shared/m83ya098z0

A follow-up single_To A Young Lover/My Guy and I.was issued by Madison Records later in 1959 similar in execution to its predecessor the group have again many more perfomances in New Jersey during 1959-1960 when John decided to break up the group after it was discovered that they were no being paid what the contracts were showing. Soldier Boy_was re-leased on Amy Records in the days of the Vietnam war.

Read a bief billboard magazine article about the group(click to Enlargue)... 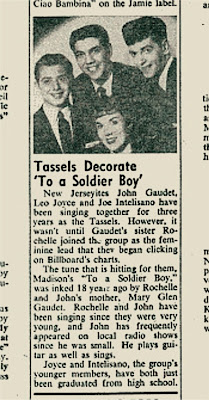 Posted by Whitedoowopcollector at 12:03 AM