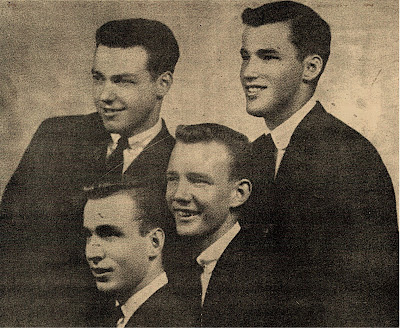 In early 1959 two high school friends from Baldwin,PA.(Pittsburgh) Bill Stammer and Ched Mertz formed a vocal group named as a know restaurant The Four Seasons they moved to Philadelphia recorded a demo and the group broke up.

Back to Pittsburgh Bill(1st Tenor) and Ched(2nd Tenor) recruited to Don McGinnis((Lead) and Don Fanzo(Bass) and the new Four Season's were born.the group signed with Bill Lawrence of Alanna Records and in the summer of 1959 recorded their original tunes_Don't Sweat It Baby/That's The Way The Ball Bounces. with Lenny Martin of Calico Records on the instrumentacion. The record was a big hit in Pittsburgh(some DJ consider the title of the A side innapropied and the label changed this in a second press to_I'm Still In Love With You). 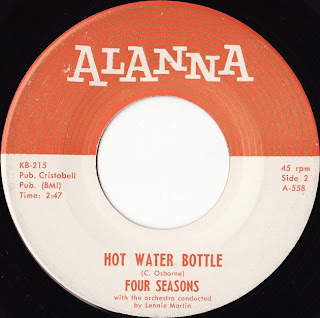 With their first release the group have a promotional tour in Chicago,Detroit and Cleveland with Bob Kobert of The Donnybrooks(see in this blog) as lead singer of these life perfomances.

In January of 1960 The Four Seasons recorded_Hot Water Bottle/Love Knows No Reasons. on Alanna Records without anny success.

In July 1960 Ched married and left and Chuck Isler joined the group and this signed with Lennie Martin's new label Robbee Records where the group recorded_Nancy's Trampoline/Mirage. in the instrumentacion of this record Lenny used a theremin.

This recording receive very little airplay and Bill Stammer left the group to enter to military obligations and the rest of the group broke up soon without made another recording.

Of course this group don't are involved with The Four Season's of Frankie Vally.
Posted by Whitedoowopcollector at 3:15 AM

Since I was the lead tenor with the Four Seasons (Not Frankie Valli), I can correct the minor errors in your.

The first paragraph is incorrect. The group was started by Bill Stammer, Ched Mertz, myself (Dan McGinnis........NOT DON) and Don Fanzo in the late summer of 1959. We had no name at first. No one went to Philadelphia to record a demo and break up the group.

Here are the facts........We were all graduates of Baldwin High School. We formed our group that summer. Ched had a contact with the future owner of Alanna Records, Bill Lawrence. Bill agreed to have us audition in Pittsburgh at Lenny Martin's Carlyle House Pittsburgh studio. We had written the song, "Don't Sweat it, Baby" and sang the song for Bill & Lenny. They didn't like the music but liked the lyrics. They asked us to re-work the music but keep the lyrics and concept. This was done at our next rehearsal.

We went back for another try and they accepted the song and offered us a contract, which was negotiated and signed.

In October, 1959, we traveled to New York City with the record label people and recorded the song at Capitol Recording Studios. That week, the new "Four Seasons Restaurant" opened in New York and when Bill Lawrence saw that name, he said, "That will be the name of the new group." We liked it and so the name stuck and was placed on the label......

The rest of your story beginning with "With their first release.........." is pretty much correct.