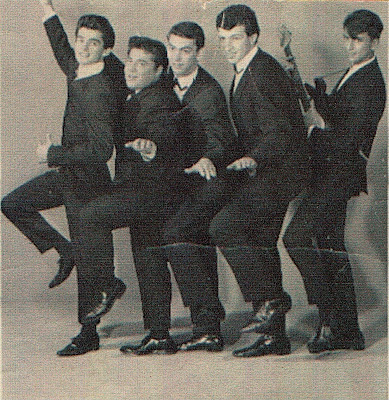 In 1958, Joey Canzano and Tom Bialoglow founded The Utopians with Brian Moran and Jackie Smith. They had achieved local popularity in the Jersey City area. About the same time, a quintet by the name of The Elgins was also gaining local popularity in the same area. The group was made up of Joe Santollo, Mike Arnone, Gus Salerno, Joe Cataldo and Mike Amato, all friends from Dickinson High School in Jersey City. When the group disbanded around 1960, Joe Santollo and Mike Arnone got together with another friend, John Salvato of The Panics, and decided to form another group.

They approached Joey Canzano and persuaded him to join them, bringing Tom Bialoglow, his long time friend, with him. This completed the lineup and they called themselves The Parisiens. They chose The Parisiens simply because they liked the French sounding name.
Over the next two years they practiced at each other’s houses in their hometown of Jersey City, New Jersey and played gigs at local hops. They made many demos and went through the hands of several managers. The demos included songs like "My Own True Love", "September In The Rain", "As Time Goes By", "Because" and "Voices Are Calling". The first three were later re-recorded and released on Coed. During this time, Joey Canzano was temporarily replaced by Mike Kelly of the Vocal Teens, a name the group would see again a few years later.

It is rumoured that two early demo recordings by the group were released in December 1972 under the name of The Vocal-Teens on Downstairs Records in New York City_Be A Slave/Till Then.

In 1962 The Parisiens changed their name to The Duprees(see in this blog) and charted # 7 with the tune_You Belong To me.