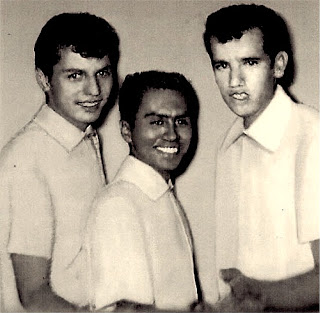 Calling themselves The Pretenders, they began singing at shows around Southern California. They met a black vocalist, Ray Bias, while they were performing at Betty’s Barn in Baldwin Park with Joe Houston in 1958, and Bias replaced Ochoa shortly afterward as the lead singer.

During a performance at the Long Beach Municipal Auditorium, the group was approached by Norty Beckman, who owned a record store in Hollywood and pressed up singles on his own labels. It was Beckman who changed their name to The Storytellers,They recorded the Nick Delgado-written tune_You Played Me A Fool. with the B side _Hey Baby. in the Zenith/Stack label.


The A side became a local hit around East Los Angeles.


The group did not record again until 1990 in the Classic Recordings Artists label.