Acappella time with THE DELORIENTS 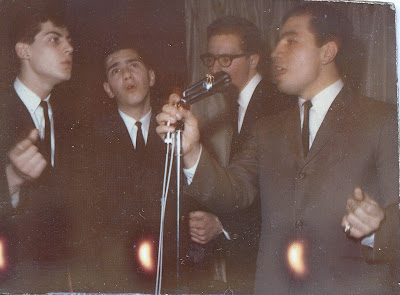 The group was formed on the streets of Brooklyn,NY in 1962 and remained together for about two years. From left to right is Fred Brown Jr.(Baritone/Lead),JoePalminteri(2nd Tenor),Carmine Romeo(1st Tenor) and Eddie Almodovar(Lead/Baritone). Eddie also sang lead on Don't Stop by the Encounters(See in this blog). Eddie still sing with a group called Legacy.

In 1963 recorded four demos songs_Somewhere Over The Rainbow/Never In This World/Kingston Town/When I Fall In Love. the first side was presented to Columbia Records who liked the song but never recorded to the group by the british invasion aka The Beatles.


Posted by Whitedoowopcollector at 9:25 AM