CIRINO & THE BOWTIES_Ever Since I Can Remember 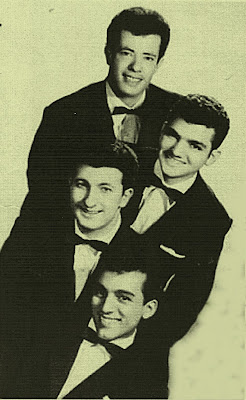 Cirino Colocrai was born in Brooklyn and was a accomplished child musician, playing multiple instruments. He and Teddy Randazzo were boyhood friends, and in the early 1950s wrote several hit songs together, including "Rosemarie." Cirino's compositions "Runaround" and "Foolishly" were both recorded by Randazzo's group, the Three Chuckles. Cirino organized a group called "Cirino and the Bowties" to experiment and demonstrate, and record Cirino's songs. The group recorded rock and roll and teenage-themed uptempo love ballads for Roost Records during the mid-1950s, their first records being "Anytime" and "Rosemarie," which sold moderately, and were a rocking lounge act. Rock and roll disc jockey and promoter Alan Freed picked them as one of the most promising groups of 1956, and heavily promoted the band that year, putting them on the crowded bills of his lengendary rock and roll shows at the Brooklyn Paramount and Fox Theaters, and also featured the group in a starring musical role in his teen drive-in rock and roll exploitation quickie "Rock, Rock, Rock," in which they sang "Ever Since I Can Remember" and also backed up Ivy Schulman on "Rock, Pretty Baby." 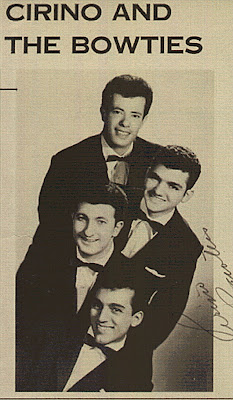 In the late 1950s, the Bowties seemed to slowly break up, as they lost their contract to Roost, and Cirino followed other, more songwriting-type, projects. Cirino's songs were featured in the movies "Jamboree" and "Country Music Holiday" during the late-'50s, such as "Toreador," "I Don't Like You No More," and "Goodbye My Darlin'." During the 1960s, Cirino continued to write more pop songs, some of them moderate hits.

Posted by Whitedoowopcollector at 9:58 AM