THE GENTS aka THE DORIES aka THE MATADORS 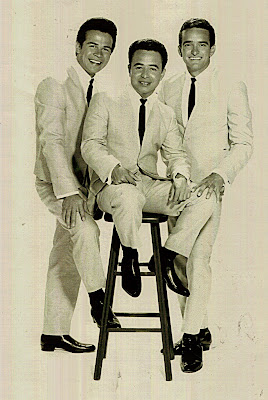 The story of this hispanic trio started in two separate ways,in 1960-61 Vick Diaz recorded two singles(see in thos blog) for the Bob Keene’s Del-fi and Donna labels without any success.

In 1961 Tony Minichiello,Manuel Sanchez and Charles Anderson from the University High School contacted with another classmate Jan Barry(of the famous duo Jan & Dean),Jan help the trio arranged some songs and obtaining a record session for the guys in Liberty Records,this label released in 1961 two sides_Why Do I Lover Her/Jum In The Line. Under the group name of THE GENTS.

Without success Charles leave the trio and Tony and Manuel contacted with Vick and another singing trio was born,Jan Barry send the guys to maverick producer Kim Fowley who liked the group and recorded some demos.in February 1962 Fowley sold a Lew Bedell owener of Dore Records a master_Stompin’ Sh-Boom/Breakup. Bedell release these two sides in the spring of 1962 under the group name of THE DORIES(the label have two prior releases for another group named The Dories) and the A Side charted #18 in Hawaii.

In 1963 the trio under the producction of Jan moved to Colpix Records where recorded three singles under the name of THE MATADORS... 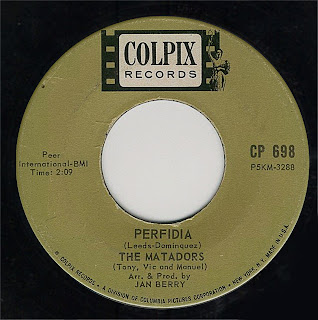 Jan’s writting credits incluided _Ace Of Hearts(with Gary Zekley and Vic Diaz)._La Corrida. And_Come On Let Yourself Go(with Artie Kornfeld).also Jan sang Bass on the _Perfidia. Side and Jan & Dean done back up vocal on the Matadors side_I Gotta Drive.(for they this side is enclosed in the Jan & Dean’s LP_Drag City).

Also The Matadors doing back up vocals on early Jan & Dean’s Screen Gems recordings and on the 1963 Surf City and Drag City Lp’s and on part of the Dead Man’s Curve and The New Girl In School 1964 Lp’s.the trio were a big part of the vocal success enjoyed by Jan & Dean at the 1962-1964 time. 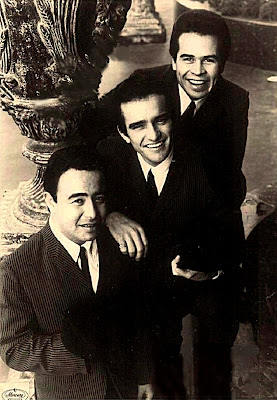 By 1964 the trio released an album on Reprise Records as Tony,Vic and Manuel and from 1965 Tony, Vic, and Manuel were a hot combo in their own right know as THE SINNERS.They often played at Gazarri’s on La Cienega Blvd., and were regulars on KHJ-TV’s local program Hollywood A Go Go.

Posted by Whitedoowopcollector at 12:52 PM