THE METROTONES_A Ting A Ling 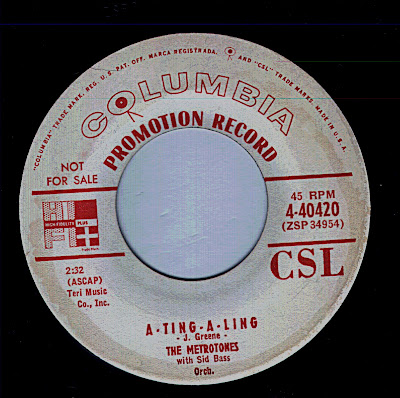 The Metrotones formed in 1953 with Nelson Miller, his wife Mary Ann and two of his former service buddies. Morris Redding and Danny Tatum from Winston, South Carolina. One year after forming, they won the Arthur Godfrey Talent Scout TV Show and in 1956 became regulars on the Patti Page Show. The Metrotones recorded several songs for Columbia Records including "Mr Sandman" with the Les Elgart Orchestra. In 1959 the Metrotones were featured on one side of the Trademarks record. Their song "I'll Dream No More" was written by two Louisville optometrists, Irvin Goldstein and Ivan M. Pearlman. Danny Tatum and Morris Redding went on to sing with Teresa Brewer.

In 1955 they recorded for Columbia Records the side_A Ting A Ling.

To Listen or Download please visit;http://www.box.net/shared/c6q5lpqye8
Posted by Whitedoowopcollector at 2:26 AM