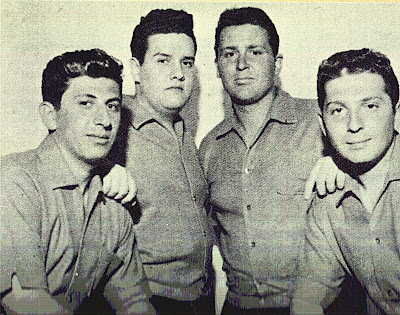 Read a bio of the group from; http://ryono.net/xtra/oldies/1961/ninoebbtides.htm 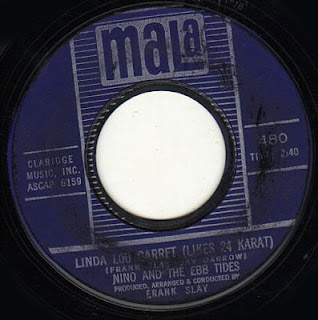 0ne of the first purveyors of rock nostalgia, Nino and the Ebb Tides started as the Ebbtides from the Bronx, New York, in 1956. Schoolmates Antonio "Nino Aiello (lead) and Vinnie Drago (bass) drafted Tony Delesio (baritone) and a guy remembered only as Rudy. They met talent scout Murray Jacobs, who cut two sides with them in 1957: "Franny Franny" b/w "Darling I Love Only You," both written by Nino and Vinnie. By the fall of 1957 the quartet (now Nino and the Ebb Tides) found themselves on Bill Miller's West 44th Street Acme label, and "Franny Franny' was getting some solid rotation from New York jocks like Alan Fredericks and Alan Freed. Their next single, "Puppy Love," saw a 50 percent change in the group as Rudy and Tony D. were replaced by Ralph Bracco (tenor) and Tony Imbimbo (baritone), formerly of Tony and the Imperials (not Little Anthony's group).

That wasn't the only change, as Murray Jacobs decided to set up his own Recorte record label in March 1958. Nino got a chance to sample the new Recorte setup as he sang backup vocals for the Rockin Chairs' spring 1958 regional classic, "A Kiss Is a Kiss." "Puppy Love," unlike frantic "Franny," was a nice ballad on Recorte that surfaced in October 1958 and saw a lot of local activity, but nothing more (though you could certainly sell a lot of records in the New York area of the late '50s with its population of over five million). The Tides' next single became their rarest ("The Meaning of Christmas"), quickly passing into history. The group was still rough-edged and learning its craft when they did two more singles for Recorte ("I'm Confessin"' and "Don't Look Around") as well as a backup job on the Rockin' Chairs' third release, "Memories of Love" b/w "Girl of Mine." By 1960 Tony DiBari was at tenor for Ralph Bracco, and the group moved to the Marco label for one ill-fated (but better sounding) ballad called "Someday." Their next stop was Larry Uttal's Madison label, whose claim to fame was the Tassels' charter "To a Soldier Boy" (#55, 1959) and the Al Browne and the Tunetoppers hit "The Madison7 (#23, 1960). 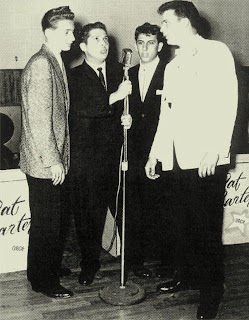 The Ebb Tides first Madison single was a song called "Those Oldies But Goodies Remind Me of You" that was starting to get action on the West Coast. The Ebb Tides revised it slightly by adding quick harmony references to such past hits as "Deserie" (THE CHARTS) and "That's My Desire" (THE CHANNELS) and singing the title lines of oldies like "Glory of Love" (THE FIVE KEYES), "Silhouettes" (THE RAYS), and "Over the Mountain7 (Johnnie and Joe) behind Nino's talking bridge. They recorded on a Friday and the record was out that Monday (today it takes that long for some musicians to program their drum machines!). "Those Oldies" was reviewed by Cashbox on May 13, 1961, 12 days after the LITTLE CAESAR AND THE ROMANS version hit the Billboard charts. Nino's group outdistanced Caesar's in Cashbox's Top 100 but Billboard gave a slice of pie to Caesar at number nine (#28 R&B) with Nino and company nowhere to be found. New York was evenly split, giving both versions heavy airplay. The battle for nostalgia bragging rights continued through both groups' next releases. The Romans tried for another brass ring with "Memories of Those Oldies But Goodies," which never got off the ground. The Ebb Tides' summer release was a revision of the Tex Beneke, Marion Hutton, and MODERNAIRES (with Glenn Miller) masterpiece of merriment, "Juke Box Saturday Night" (#7, 1942). It did get off the ground, complete with imitations of THE MONOTONES' "Book of Love" and THE SILHOUETTES' "Get a Job" replacing the '40s versions of classics by THE INK SPOTS and Harry James. On September 4. 1961, "Juke Box" charted on Billboard's Top 100, reaching number 57 and becoming another East Coast hit. 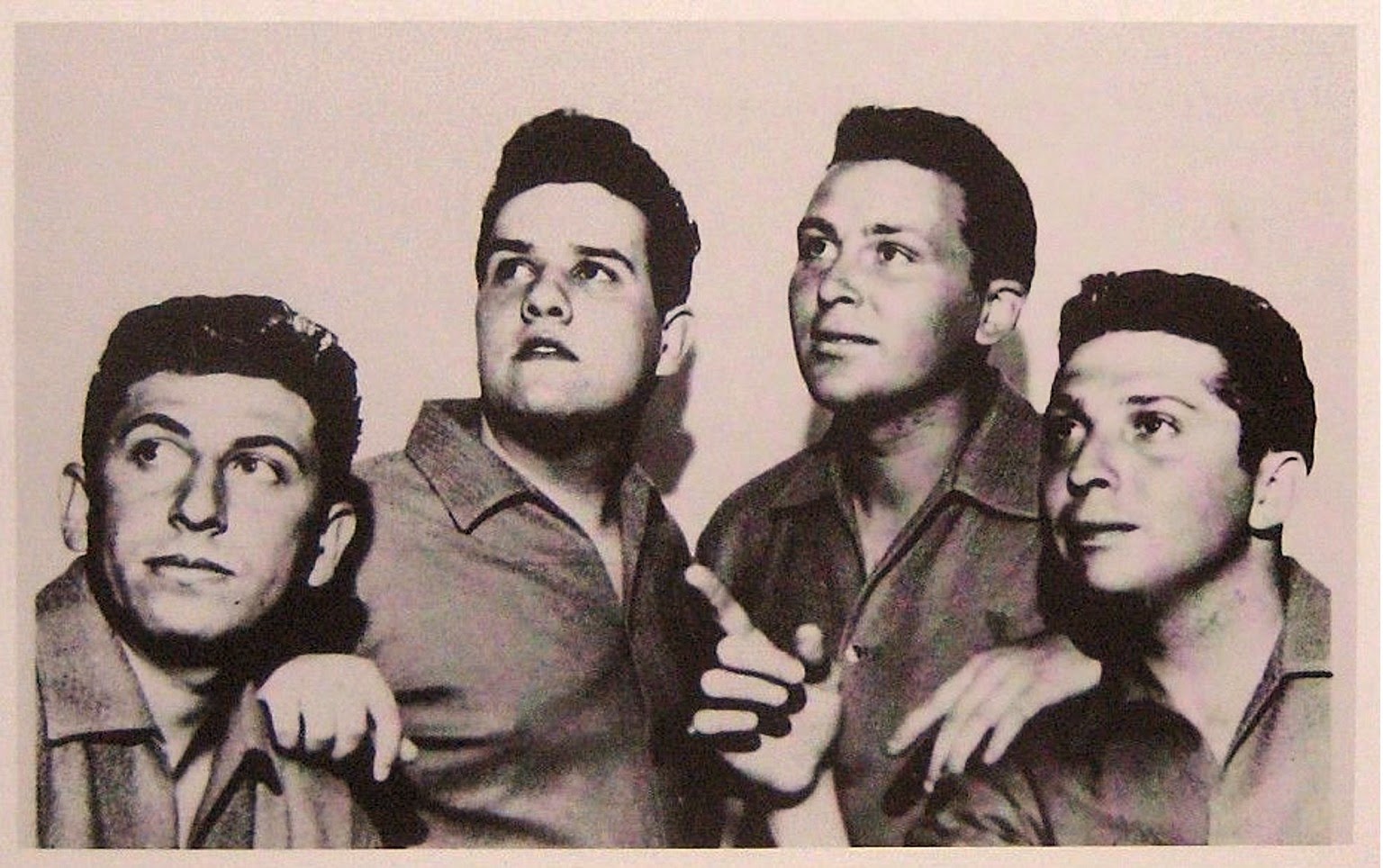 It's likely that the references to earlier songs in these recordings helped to fuel the first wave of rock nostalgia that soon cropped up on Top 40 radio and on oldies compilations by Original Sound, Roulette, and many other labels in the early '60s. It's unusual for a group to leave a label after their biggest success, but Nino and the boys had no choice since Madison was going out of business. Toward the end of 1961 they fell in with Mr. Peacock Records, cutting one of their best singles, "Happy Guy." By this time their sound was polished, and the BELMONTS/DEL-SATINS-styled rocker seemed like a winner until Mr. Peacock laid an egg in support of its single. At around this time, Bronx songwriter Ernie Maresca wrote a rocker that the guys heard and passed on. Ernie took it next to Dion, who recorded it with the Del-Satins and made it a number two record in the nation. The Ebb Tides must still be smarting over the loss of "The Wanderer."

A few more singles on various labels and the group members were back to their separate lifestyles by 1965. Unlike many groups, even when they were on the charts the Ebb Tides kept working at their regular jobs and never became full-time performers. They regrouped in 1971 for the start of that decade's rock revival and disbanded soon after, returning to their professions: Vinnie at a TV and radio sales company, Tony Imbimbo as a New York City policeman, Tony D. for American Express, and Nino as a record distributor. In the '80s the group would occasionally get together to give fans of the '50s and '60s a taste of those oldies but goodies.

All four boys are members of the U.S. Naval Reserve and train together at Fort Schuyler in New York.
See the group members in the Navy.

Posted by Whitedoowopcollector at 12:17 PM

"What is your name dear" was a different group from philly which recorded the song for teen records as was the Revels who recorded for teen with"it happened to me" in 1956, both long known philly groups to us living un philadelphia, U.S.A.