PAT CORDEL & THE CRESCENTS_Darling Come Back 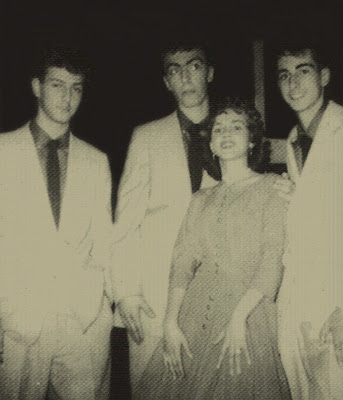 In 1955 in Staten Island,Vito Picone 15-years old and their friend Carman Romano player the trombone in their high school but in these days really they want form a vocal group and reunited other kids from their high school band: another trombone man.Ronnie Jones and one girl trumpet player Pat"Cordel"Croccitto.Calling themselves The Crescents,they sang for the fun of it and perform at local church functions and dances.

In 1956 after winning a singing contest, where the 1st prize was a recording contract they signed with Club Records in New York and recorded_Darling Come Back.written by Vito this side is one of the first white doo wop with the kid sound in the style of Frankie Lymon & The Teenagers because Patricia had the high Frankie Lymon sounding voice .The B side_My Tears was composed by the whole group.Pat sang lead on both sides.

The record have some local sucess (later reissued in Michele and Victory Records),resulting in nationwide tours with The Cadillacs,The Five Satins or The Danleers but the youthfulness of the group and the difficulties of traveling around the country with a fifteen-year old girl led to a break up.Pat became one of the June Taylor dancers (Jackie Gleason Show) and the boys soon were know nationally as The Elegants.

Posted by Whitedoowopcollector at 11:49 PM