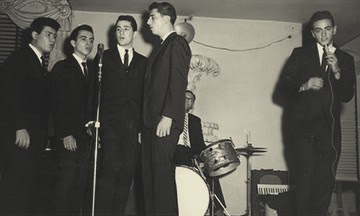 In that photo, I was second from the left. We could not think of a name so we just called ourselves The Teletypes. We got together for that 25year dinner in 1962. We all worked for RCA Communications except Vinny Frankavilla. His brother Joey Villa sang with The Three Friends and recorded the song Blanche. Then he went to the Royal Teens and did the lead for Short Short’s. I also worked at 7 Central Park West. WINS Radio station was just above us. And Allen Freed, Stan Z. Burns and Jack Lacy were the Disc Jockey’s there. they always dumped a box of records on our desk. Many groups you never heard of. Because they did not pay Allen Freed to play them. He died a broken man caught up in the Payolla Scandle.
Posted by Whitedoowopcollector at 12:39 AM