THE SHERWOODS_The Search Is Over 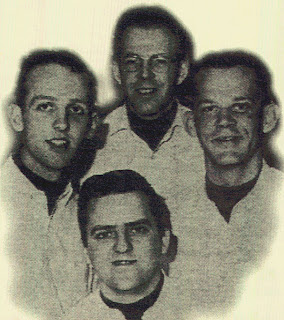 This Danbury,Connecticut white vocal group formed by Norm Marcioch,Harry Hawkes,Bob Benton and Chuck Spauldind auditioned in 1965 for Laurie Records with the songs_the Search Is Over/That's My Desire.but this label never made a recording of The Sherwood's.

Read a brief bio of the group from the CD “Lost Danbury Doo Wop”... 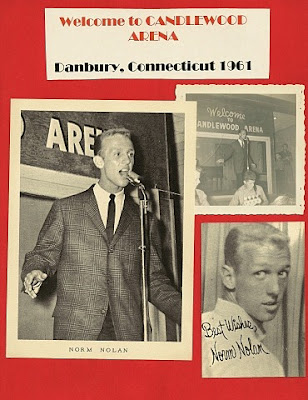 The Sherwoods were “born” in 1964 in Connecticut. All four members attended Danbury High School and got together after they had graduated. in 1961 Norm Nolan Marcioch(Lead) sang a brief time as a solo artist (see picture above) but soon formed a duo with Chuck Spaulding, both were hanging around Danbury’s musical mecca, the Record Fair record store in downtown Danbury. In 1964 Bob Benton came on board as Bassman. Number four, Harry Hawkes, joined the group after Bob and Norm had heard him sing in the local Baptist Church choir.

Now that they were at full strength the group practiced as often as they could. Most anytime. Most anywhere. One session especially stands out in their minds. It was a splendid early spring day in 1965 and the foursome set up at Sherwood Island State Park on the shore in Westport. There, with Chuck on his trusty acoustical guitar, the gang ran through their line-up of songs of the day mixed with a healthy dose of oldies.

It must have been a good blend . . . because suddenly it seemed that there was a sizable crowd clapping and singing along and making requests. “Gee, they must really like us,” Norm recalls himself thinking. Not only did the Sherwood Island outing give the quartet a jolt of confidence, it also gave them a name. When someone in the crowd shouted “What’s your name?” the almost immediate response was “We’re the Sherwoods.” And indeed they were.

A couple of years earlier Norm had heard a home-made demo by a local Elvis sound-alike named Fran Greer entitled Searching For Love. Norm was not impressed. To him, at least, the effort was short, disjointed and utilized lyrics that didn’t rhyme. Norm, however, liked the search idea and, with a little help from Chuck, penned the up-tempo gem proudly presented here.

The Sherwoods played various gigs. They appeared at shows and dances in Danbury, Newtown, Bethel, Ridgefield and New Milford. The boys also ventured across the New York state line into Brewster, Mahopac and Carmel. Harry remembers playing the Birch Hill Ski Area in Patterson. “Our pay was a barbeque meal,” he laughs. Asked what would pay normally be he ponders a second or two, then laughs again and replies “a meal.” 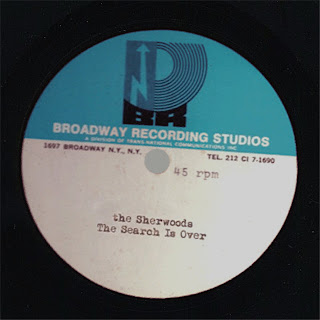 The group’s biggest thrill was, alas, also their biggest disappointment. It was their venture into “The Big Town,” New York City, to cut a demo at Broadway Recording Studios at 1697 Broadway and then shop it around down the block at the legendary Brill Building.They recorded the original side_The Search Is Over. A song written by Marcioch and Chuck, and the standard_That’s My Desire.  The four-some, plus a friend of Bob’s to play drums, did the studio work for both songs in one take. Chuck then added a bass and rhythm guitar track as well.The group’s favorite spot: the sock hops held by Sol Goodman, the Record Fair’s proprietor, at the Danbury Roller Rink with Bridgeport disc jockey Harry Downey doing the emceeing.

So far, so good But that was about to change. A short time later, when the demo copies were ready, Bob and Norm drove to Manhatten, picked them up, and went to work. Some record companies were polite and took a copy and said “We’ll call you.” while others were more direct. Norm recalls a visit to Laurie Records (Dion & the Belmonts’ original label) as typical. The person in charge played about 15 seconds of The Search Is Over and said “Thanks for coming in.” So much for fame and fortune.

In 1997 The Cristal Ball label released the Sherwood’s sides in one of their doo wop CD’s”From The Vaults Vol. 3” and in 2008 these two songs appear in  the doo wop CD”Lost DanBury Doo Wop”.


Posted by Whitedoowopcollector at 12:13 AM

Hello, this is Norm Marcioch the Sherwoods lead singer from Danbury Connecticut, U.S.A. and appreicate you covering the "Lost Danbury Doo Wop" story. I now live in East Patchogue on Long Island, New York and appreciate the groups and web sites that help keep the past present. My email is: normandot@aol.com and I'd love to share a limited supply of Free copies of The Search is Over and Thats my Desire to anyone in the states that would like a copy.