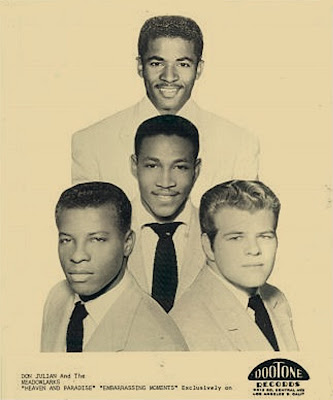 This group started as a black trio in Los Angeles Fremont high school in 1953 first know as The Souvenirs and consisted of Donald "Don" Julian(Lead-Tenor),Ronald Barret(Tenor) and Earl Jones(Baritone).in 1954 Randolph Jones from The Penguin's was added as Bass and Billy Pruitt as Second Tenor.

After of two releases in Specialty with Percy Mayfield as The Maytones in 1954 recorded two singles for RPM Records and after Randolph left the group,Earl moved to Baritone-Bass and white Tenor Glen Reagan was added with this white incorporation the group was the first interracial vocal group of the west coast. 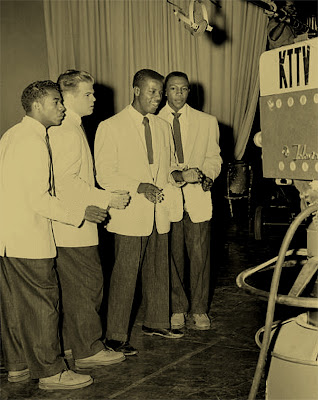 .Julian written the song_Heaven On Paradise. the group auditioned wih this for Dootsie Williams at Dootone Records.the label liked the tune and released this in 1955.the single sold well and with the success came a California tour for the guys.

The group continue recording for Dootone until 1958.after broke up Julian formed another Meadowlark's group.

Complete information about this group at;

Thanks, great article of "Don Julian and The Meadowlarks" !!!

Don was an awesome man!!

Weren't Don Julian & the Meadowlarks the very first interracial r&b group in the country? They preceded the Del Vikings by a few mos. And does anyone know where Glenn Reagan can be found nowadays as he was still around in 2009?