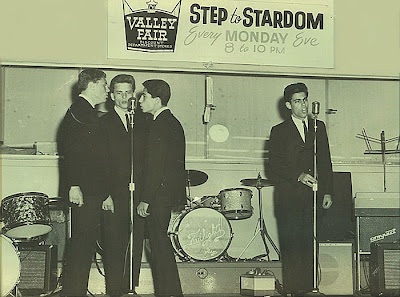 The Autumns came bout late 1964 consisted of Eddie Brian,Joe Simone,Bill Paquin and Joel Katz in 1965 released two Eddie compositions_Dearest Little Angel/Maureen. for The Medieval Records these sides have great success in New Jersey with may live appearances for the group.
The next record on Power Records was an acappella version of _Never.original by The Earls this made several appearances on TV for the group.
Finally in 1967-68 the group is enclosed in two Doo-Wop acappella LP's_Battle Of The Groups Vol.1 with Over The Rainbow. and_Stars Of Acappella Vol.2 with Lorraine.
In 1978 the group was reformed by Joel and Eddie .
Listen...

Posted by Whitedoowopcollector at 4:20 AM

I wish those two guys could get together again. Just a match made in bergen County