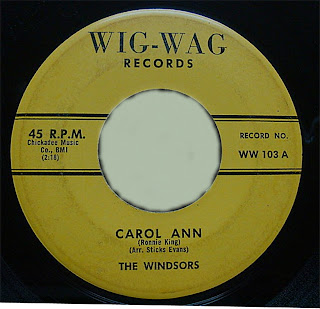 1957 in Washington,Pa. Ron King have a vocal group with some of his teenage friends named The Andres. they recorded an original writing by Ron_Jo Ann. and the Dub's side_CouldThis Be Magic. they send the demos a to various DJ's but without any success they broke up soon.

In 1958 The Playmates(see in this blog) recorded an update version of_Jo-Ann. and charted nationally # 19.
1958 Ron now student in the Washington high school assambled another vocal group The Windsors consisted of Ron King(Lead),Patsy"Tookie"Andy(2nd Tenor),Bob Easingwood(Tenor) and Larry Namee(Baritone) they recorded the King's original composition_Keep Me From Crying. and their early _Jo Ann. side now as _Carol Ann. the group send the new two demos to Matt Furin owner of Wig Wag Records on Greensburgh,PA. who send the group to New York for a recording session at Regent Sound Studios.the same studio at which Johnie Maestro & The Crests were recording the classic teen age anthem_Sixteen Candles. 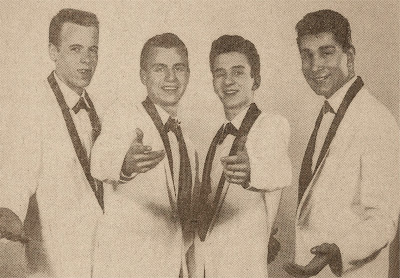 In the end of 1958 the label released the two sides and_Carol Ann have a big acceptacion and send the guys to have many public perfomances but unafortunely the group disbandeds during the srpring of 1959 without made another recording.
Ron continue in the musical bussines recorded in 1963 for Luanda records and in 1964 formed a band under the name of Ronnie King & The Passions who recorded in 1964 for Scotty and in 1966 for Gateway Records.

Posted by Whitedoowopcollector at 7:43 AM

Thank you very much !