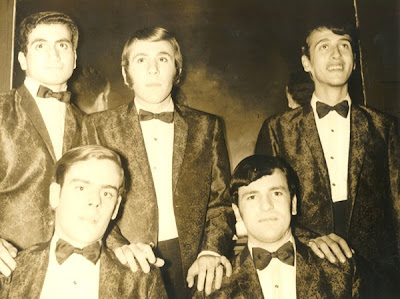 Formed in the Bronx, New York, in 1963 by founding members Mark Dinep (lead), Steve Horn(bass), and background members Eddie Schwartz, Henry Levy, and Larry Rosensweig. This group put together a large body of work and recorded the classic “Stormy Weather” along with Acapella versions of “Possibilities”, “Canadien Sunset”, and “Happy Teenager” plus many other songs on Old Timer and Siamese record labels. In 1965, Kenny Bank and Henry Salas joined the group replacing Levy and Rosensweig. This group continued to record and perform until 1968 and also had a large body of work that can be heard on the Acapella recordings of “So Much In Love”, the haunting “Flames 66”, “Teardrops Follow Me” and “Stand By Me” among others on the Cat-Time and Siamese labels. The Five Sharks were part of the best Acapella albums ever put out ("I Dig Acapella" Cat Time LP Vols. 1 & 2). 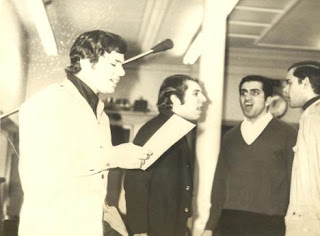 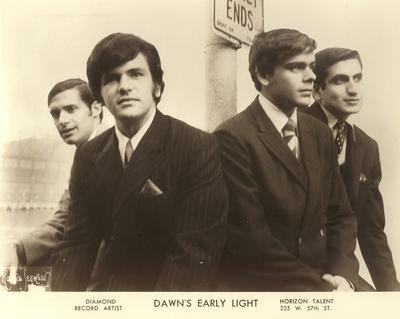 In the late 60's early 70's with the dead of the acappella sound the group recorded as Dawns Early Light for Diamond Records.


Posted by Whitedoowopcollector at 3:41 AM

I receive this Email from Eddie Black...

Steve Horn was not as you state a founding member of The Five Sharks, in fact we were just four guys for our first 4 records, our harmony was very high our producer Bobby Miller suggested a bass ,we went through 2 or 3 basses before we found Steve Horn, so he is not actually a founding member, Mark Dinep, lead, Larry Rosenzweig baritone Henry Levy ,second tenor, and me Eddie Schwarts aka Black first tenor and sometime lead started this group, no one else

Although Steve Horn was not an actual founding member ,since we really started recording with just 4 guys.When we finally tried several basses it was Steve's voice and personality that cemented him forever as The bass of The Five Sharks he remains not only on our records but forever in our hearts having died in 2013 of bone cancer.RIP,bro.We once for a goof recorded hey Mr. Bassman, never knowing that years later recording as Dawns Early Light for Diamond Records without Steve who was singing with a band called Peck's Bad Boys ,that we would record a song produced by Johnny Cymbal called Monday Kind of Friday ,written by Danny Jordan of The Detergents who all those years before had recorded and had a hit with the very song we fooled around with recording Hey Mr. Bassman, Steve would have loved that irony.
Eddie Black, first tenor/lead The Five Sharks, Dawns Early Light