THE OVATIONS aka LITTLE ROMEO & THE CASANOVAS 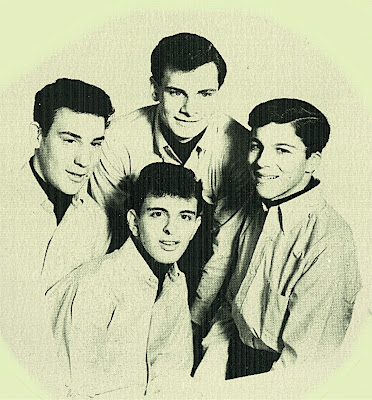 They recorded in 1964 for Josie Records...
-Who Needs Love/Remembering.

Later they recorded for Ascot Records in 1965 as Little Romeo & The Casanovas...
-That's How Girls Get Boys/Remember Lori.

Read a brief bio about the group...

In 1963 Greg Malmeth,Gary Willet and Ronnie Buchter formed a singing trio in Flushing and Bayside in the New York City borough of Queens, after they accepted Sammy Cantos as their Lead singer named to the group The Galaxys(by the Ford car Galaxie).

The group recorded six sides with Sammy Cantos(Lead),Gary Willet(1st Tenor),Ron Buchter(2nd Tenor) and Greg Malmeth(Baritone,Bass), in January of 1964 were released two_Who Needs Love/Remembering. On the Jubilee subsidary label Josie Records under the new name of THE OVATIONS.

The A Side have a good local acceptation and was picked on the Murray The K radio show in New York but dead soon with the aparition of the first recording of The Beatles in the US.

In early 1965 the group were in the studio to record two new sides_Remember/That’s How Girls Get Boys. For United Artists who released the sides in the summer of 1965 on their Ascot label as LITTLE ROMEO & THE CASANOVAS(because in this time a black group have a national hit with the name the Ovations) but the label only released the disc as a promotional copy,this lack of promotion and changing on musical tastes disgusted the guys and the group brea-up soon.

In 1968 Sammy and Gary working on one LP for ABC Records but this never was released,in 1971 Sammy recorded one single for Kef Records as Sandy Kammon.in 1985 Sammy assambled another Ovation’s group and singing in the revival circuit until 1991.

Posted by Whitedoowopcollector at 4:15 AM

sang with Gary Ronnie and Greg for a short while. Appeared with them at Oakland Jewish Center dances as Bob Young. These shows were produced by Jerry Novack a Murray the K wannabe. If anyone knows what happened to the guys I would greatly appreciate finding out. I can be connected with at: stevens6@ymail.com

Yes, I remember the OJC dances with Jerry Novak.