THE ROMANCERS_Don't Let Her Go 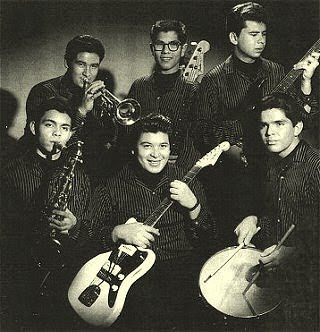 In 1962 with Max Uballez on lead recorded for Magic Circle Records and after signed with Del-Fi where recorded an all instrumental LP and backed to the Del-Fi’s Heartbreakers(see in this blog).

In 1964 the band recorded for Eddie Davis,Linda label five singles ( those 45’s have a remake of the Etta James-Harvey Fuqua duet _My Hearts Cries. Or _Don’t Let Her Go. And_Lover’s Thing. two popular sides in L.A. area).

Without any success and with the british invasion the band changed their name to The Smoke Rings.

Posted by Whitedoowopcollector at 3:38 AM

The Romancers also played as 'The Majestics' with David and Ruben Robles on Linda 121. The record is '(I Love Her So Much) It Hurts Me' a massively in-demand Northern Soul 45.