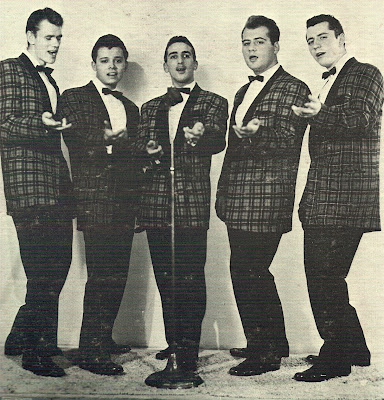 A Brooklyn street corner group formed in 1957, they originally called themselves the Capris(See in this blog) until they found out that friends of theirs from Rockaway Beach in Long Island were already using that name. So Lenny Cocco and company renamed themselves The Chimes. The original Brooklyn quintet's lead singer Lenny Cocco (leader and originator of the group), was into standards at an early age since his father was a professional accordion player. Lenny's father, Leonard, thought Tommy Dorsey's 1937 number one hit "Once In Awhile" would work well in a vocal quintet arrangement, so the group began practicing in a local pool hall that had a piano. In 1960 the group went into the studio and recorded a demo of "Once In Awhile", attracting the interest of the engineer. While The Chimes were in the studio the engineer called a friend at Tag Records and within an hour Andy Leonetti was there listening to the group's first recording. By the fall of 1960 "Once In Awhile", was hitting the Billboards’ national charts. It finished one

spot shy of the top 10, spent 18 weeks on the charts, and sold over one million copies. Although they had a white doo-wop sound by today's standards, in 1960 The Chimes were thought by many to be a black group.

Their first major booking were thus in black theatres such as the Howard in Washington, the Regal in Chicago, and the Apollo in New York. Their second single was "I'm I 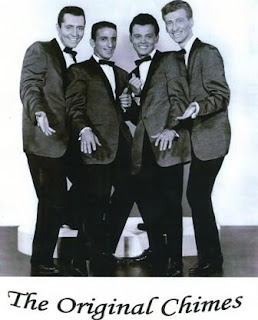 n The Mood For Love" another standard (Little Jack Little, 1935). Recorded in a similar style to "Once In Awhile" it charted on March 27th and rose to number 38 nationally. By spring, the group was on its third standard in three tries, the Eddy Duchin number one smash "Lets Fall In Love" , but apparently radio stations weren't buying it (perhaps due to a deviation in vocal arrangement from the first two hits- "Lets Fall In Love" had the group up front singing the lead). The group tried a Lenny Cocco original "Paradise" in 1962, and then moved over to Metro Records for one 1963 release, "Who's Heart Are You Breaking Now". At this point, the group was now a quartet: bass singer Pat McGuire had died in a car accident. To this date in memory of Pat, Lenny has kept the group a quartet without another bass singer. In November of that year, Laurie Records picked up the Metro recordings but released them with no success.

In 1964 The Chimes wound up on Vee-Jay Records but again with not much success as Vee-Jay records was putting all their energy into releases by the Beatles and The Four Seasons. With that kind of competition, the Chimes release of "Two Times Two" was virtually ignored. By 1965, the group had separated only to reunite for some rock and roll revival shows in the early 1970's.

Posted by Whitedoowopcollector at 10:05 AM