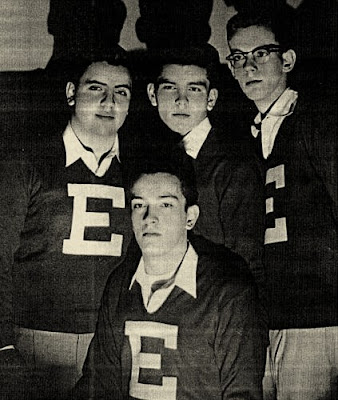 Group from the suburb of Pittsburgh know as Dakmont.formed in 1956 as a trio by Bill Pazman,Bill Garove and Karl Beilstein.this trio singing in local shows,School dances and private shows.

When Bill left the group was replaced by don Munhall and fourth girl member was then added Judy Berg.they started traveling around the local area with Pittsburgh DJ Jay Michael from WCAE"Record Hops" show,it was in November,1957 when Karl and Judy left the group and now The Emeralds consisted of Bill Pazman(Lead),Dom Slebrich(Tenor),Dom Munhall(Baritone) and George Grimes(Bass).


They continue with the DJ Jay Michael this send one demo to Bullseye Records but this label rejected the demo. Dickie Goodman owner of Eldorado Records heard the demo and wanted to record the group this recorded two new demos_the One I Adore/I'm Dreaming. in the WCAE studios but the sound quality of these tunes are terrible and never were released on Eldorado Records. 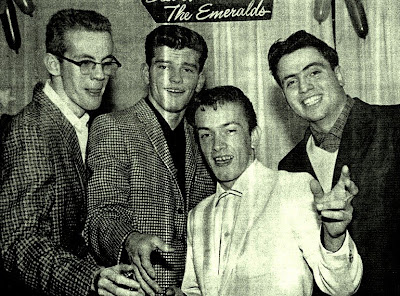 In late 1957 Don Munhall send their demos to ABC-Paramount Records,this label liked the group and send this to New York City for a recording session_You Belong To Me/The One I Adore. was released on Juanary 25,1958 and the A side have a big local accepptacion and sold 50.000 copies.

In August,1958 The Emeralds second record was released_I'm Dreaming/Confess. but this made only a very small dent in the Pittsburgh area and the group never made another record.in early 1959 the Emeralds finally broke up.
Posted by Whitedoowopcollector at 4:05 AM