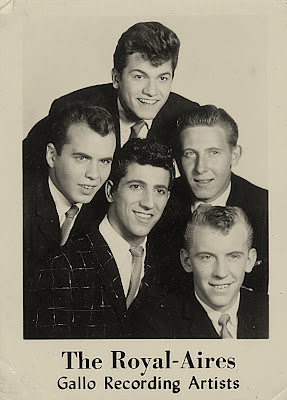 Sal Richards was born and raised in Brooklyn,NY where at the age of 18 at the Charcoal Ovens formed his vocal group called The Royal-Aires consisted of Sal Richards(Center),Johnny Len(Left over Shoulder),Frank Amodeo(Top),Rudy Gasparik(Top Right) and Ray Freudenberger(Bottom Right).

They singing on the street corners and local shows moved to New York where orchestra leader and singer Lee Clark signed the group for his own label,Gallo Records where in the summer of 1957 recorded the sides_Friendship Ring/Baby Baby.

The group toured around the country to promote the recording and the sides were a hit in the New England states_Baby Baby. was number one and_Friendship Ring. Three.

The recording was introduced in the Alan Freed show but Lee Clark refuse to pay to have the record played(payola time) and this dead soon. 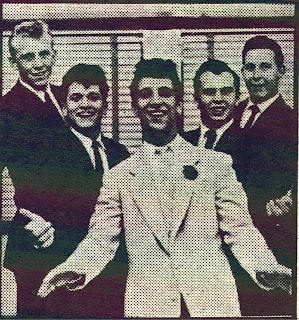 In the fall of 1957 the group released the sides_Please Don’t Leave Me Now/You’re In Love. Without any success.

The group continue singing in the town without made another recording and disbanded in 1959.

FranK Amodeo recorded as Gino on Golden Crest(see in this blog).