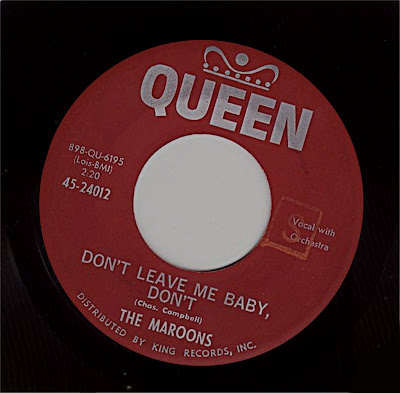 Band/group from Louisville,KY. formed by... 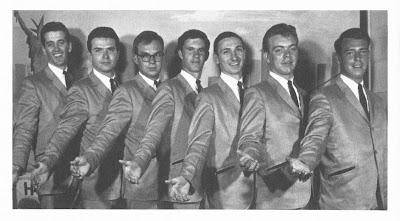 From left; Gary,Dave,Bill,Jon,George,Larry and Tommy.

The Maroons were formed in 1961 at Eastern State University. The majority of the group were from Louisville who were attending collage at Eastern. Several months after the group was formed, lead singer
Chuck Campell left the group and was replaced by Gary Edwards.

The group's first single was released in April, 1962,_Someday I'll Be The One/Don't Leave Me Baby,Don't., on the Queen label. The Maroons had one other single in1963_At The End Of Each Day / Just Checkin. Jimbo Label and disbanded in 1964.

-Don't Leave Me Baby,Don't. is a Dion soundalike tune.

Posted by Whitedoowopcollector at 2:37 AM

This should read that John Bozeman joined the Maroons in 1964 and that summer brought Gary Edwards and Joe True (bass) together with Norm Osborne (organ) and Bud Dixon (drums) to fill out the house band for a nightclub called the Palms in Lexington, KY. We called this band Gary Edwards and the Embers which evolved into S.A.G.E. after I left in 1965. I'm guessing Bill Rauth may have been a founding member of S.A.G.E.

Also: Gary Edwards and the Embers had one single in 1964: To Be Loved/If You Don't Come Back, on Jimbo Records.