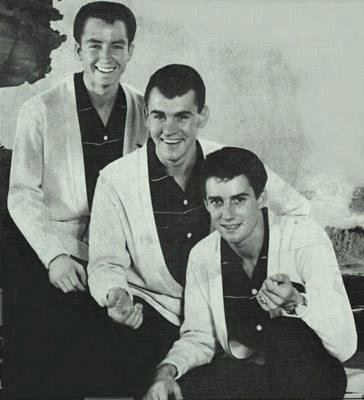 The group had its origins in 1959 at the Marist Brothers College in Randwick,Sydney where Colin Loughnan and Mike Downes singing in the choir and decided to form with Kel Palace and Deniss O’Keefe their own vocal group under the name of The Four Tops influencieds by the US vocal groups as The Diamonds or Danny & The Juniors.

They got a lot of experience at school dances but Dennis left soon to join the air forces and the rest decided to continue as trio now know as The Crescents,they signed with singer Johnny O’Keefe as vocal group on his Leichhardt Police Boys Club Dances and on Johnny’s TV show”Six O’Clock Rock” where the group debute 7th March 1959. 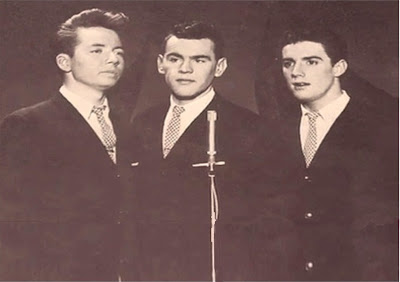 The success of these appearances go to Johnny to sign the group with Lee Gordon of the Leedon label where they recorded their first single with the Ricky Nelson’s side_Everlovin b/w_You Broke My Heart.

In Agust 1959 the group was added by Lee Gordon to the Johnny Ray Australian tour and in October to the Fabian Australian tour,with all these appearances the group soon was very popular in Sydney (with a rival vocal group The Delltones,see in this blog).in late 1959 Leedon released the single_Mr. Blue/How Important Can It Be. The A Side was a US hit by The Fleetwoods and The Crescents have a top 10 in Australia with their version.

In early 1960 their third single_When You Wish Upon A Star/Hand Of God. was released on the Lee Gordon Label. 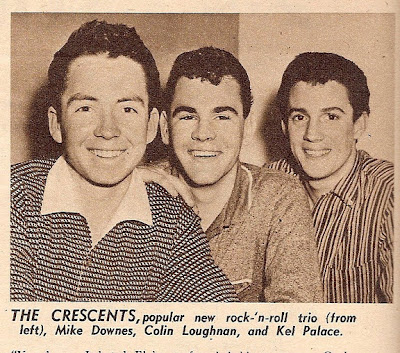 In September of the same year the group appear on the Ricky Nelson Australlian tour and back to the recording studio to record a EP titled “Rock Time” with four songs The Impala’s_Sorry(All The Way Home),The Teenager’s_Why Do Fools Fall In Love.the standart_Down By The River. And the original_Dreaming.

In late 1960 a new single was released with the Laurel’s tune_Picture Of Love b/w_One More Kiss.

Followed in early 1961 by_Stars Will Remember/Love Love Love. The A Side have the beautiful voice of Nancy Eichhorn of The Graduates(see in this blog).

Their 6th single have the sides_The Way Of The Cross/The Story Of The Cross. This is a unusual record why the group singing in the A Side and back up to Chris Christensen in the B Side.
The Crescents “Hit It For Six” was the new EP of the group released in 1961 with the six first 3 singles sides of the group.

Above;the two Ep's of The Crescents.

In late 1961 Mike Downes leave the group and was replaced by Alan Roberts,this formation released_Get A Job/Silhouettes.

In July 1962 Noel Widerberg lead singer of The Delltones killed in an accident car and Colin Loughnnan signed as new member of the group and of course The Crescents now as a duo broke up soon.

In late 1962 Lee Gordon released on the Teen label a new Crescent’s single with the know A Side_Mr. Blue and the unreleased B Side_You Mean Everything To Me.

Actually the B Side was recorded by Johnny Robson with the backing vocals of Pat Mclusky and The Graduates.

Posted by Whitedoowopcollector at 6:12 AM