THE HIGH SEAS_Sunday Kind Of Love 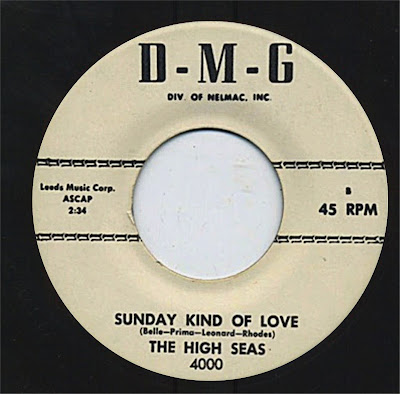 The High Seas were an interracial vocal group formed as the Uniques in Denver,Colorado by 3 blacks and 2 Hispanics. Chuck Price(Lead),Jerome Drewett(Tenor/Falsetto), Henry Gallego (Baritone/Tenor),Adrian Torres(Bass) and Jack Davis played piano (Chuck, Jerome and Jack were black, and Adrian and Henry were Hispanic).

The High Seas moved to Hollywood,California and in April 1960 at Radio Recorders on Santa Monica recorded 4 songs_We Go Together (a cover of the Moonglows tune), Sunday Kind of Love (cover of the Harptones), The Angels Sang (an old “popish sounding” song), and an acetate of another song.
They recorded with Sam Severin and the Satellites,a rockabilly group as instrumental band. and Jimmy Bowen (a big name in music at the time) was the A&R man for the whole session. 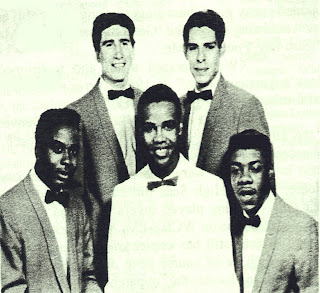 In June,1960 their manager and owner of the D-M-G label, Eileen McShane released the_We Go Together/Sunday Kind Of Love. Sides.

The High Seas also backed up Sam Severin & The Satellites, on their song_Each Night. for D-M-G Records in 1960.

The High Seas recording have a locally big acceptacion and play in the radio circuit,the group singing in El Monte Legion Stadium but when the record dead they back to Denver and soon disbanded.
Posted by Whitedoowopcollector at 9:46 AM