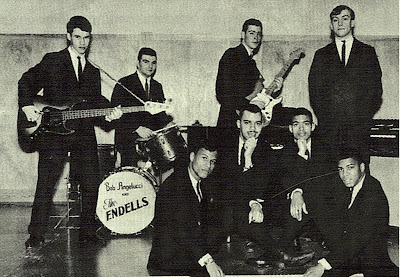 The Endells were a mixed group-band from the Harrisburg area in Pennsylvania formed by a white band consisting(the group have many personal changes) of the founder Bob Angelucci,Tom Pane,Terry Crousore and Tom Hoover and a black group formed by Larry Settles(Lead),Mit Palmer,John Scales and Art Proctor.

In 1963 recorded for the Hy Fenster's Heigh-Ho label the sides_Vicky/The Monkey Dance.

Later menbers of this group and of The Del-Chords(see in this blog) formed The Magnificent Men who recorded on Capitol Records.
Posted by Whitedoowopcollector at 10:45 AM