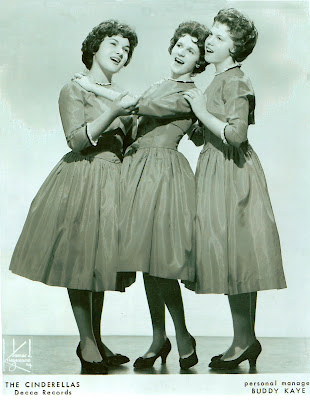 Great site dedicated to The Cinderella's girl group who recorded for Decca and Columbia Records in 1959 and early 60's. 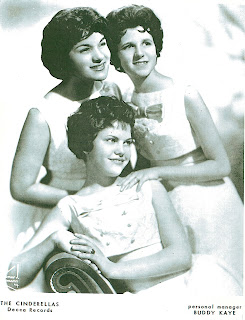 The Cinderellas began their singing career as The Three J’s (Julia, Joyce and Jo). Jo (Josephine) was the youngest of the group – 11 years to 13 years old. The Cinderellas started right after that. They had the highest amount of votes in the history of the Ted Mack Amateur Hour Show on TV, then performed at Madison Square Garden.

There was a talent scout there and he wanted them to audition for his boss. Their former Manager took them to his NY apartment and they auditioned over the telephone for his boss, who would then become their NY Manager, Buddy Kaye.

The Three J’s are still remembered in Hoboken, NJ. Their former Hoboken Manager is about 92 years old and still gives concerts. One of the girls went to a concert and on the “Program” was written that he was the former Manager of The Three J’s.

Also, some time ago Hoboken Elks’ newspaper had a history of Hoboken’s past, which asked if people “remembered The Three J’s”. They were often the entertainment for Frank Sinatra's Mother (Committee Woman in Hoboken, NJ) many Sunday afternoons at the Union Club in Hoboken. For her 25th Anniversary, she invited The Cinderellas to perform. As the Three J’s they went with Cousin Brucie of 1010 WINS NY to perform at Wild West City in Netcong, NJ with other performers such as the Shirelles, Danleers, Chantels, and Tokens.

They were so young that they didn’t know who these performers were at the time.They also performed at various country fairs in Pennsylvania with some of the afore mentioned groups. As The Cinderellas they appeared on Dick Clark’s American Bandstand. They sang on the same broadcast as Tony Bennett when he sang Rags to Riches, at the High Hat on 53rd Street in Bayonne, NJ.

The group release three records, one for columbia and two for Decca all in 1959. The first being "The Trouble With Boys/Puppy Dog" Columbia 41540, followed by (Yum Yum Yum/Mister Dee-Jay) Decca 30830 and I Was Only fifteen/You never Shoulda Gone Away,Decca 30925). There were only two girls on this first release, a third girl joined for the other two recordings.
Posted by Whitedoowopcollector at 12:51 AM

Hi! I was just listening to “Underground Garage” on Sirius Radio, and they played a song called “Don’t Wake Me Up.” They sounded a lot like the Ronettes, and the production was totally Phil Spector. When I Searched, I saw a black girl group (could find nothing else on them but listening to a song), and then your blog. Do you know anything about the group I heard and if they were a Spector group? A good thing came of my search...I landed on your blog page! Love it, thank you! Cyd Kaye