THE DARVELS_I Lost My Baby (With False Start) 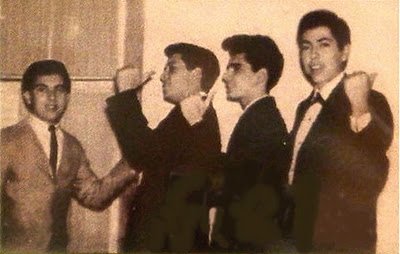 Warren Gradus broke up with his first group, The Crescendos with who have a demo_Zing/Oh What A Night. In his high school Rooselvet in the Bronx discover another group, The Thunderbirds consisted of Gregg Paravati,Richie Capala and Vinny Cea and soon Warren join as their new Lead singer.

From the Dodge DART and the CARVEL ice cream they took their new name THE DARVELS. With addition of Mike Gervan from the Warren’s first group to sing Bass they practice for many weeks, Gregg and Warren written songs for the group_I Lost My Baby(Gregg) and Gone(Warren). The group recorded an acappella demo at Sanders Studios in Manhattan. 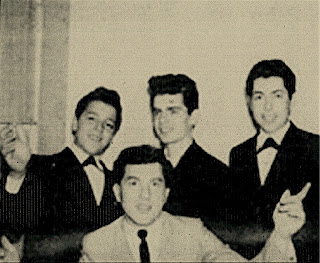 Above from left to right; Richie Capala, Greg Paravati, Mike Gervan,Warren Gradus(front) and not in the picture Alan Mandel.

Their demo was presentet to record producer John Janitch who send the guys to the Variety Arts Studio to re-record with music the acappella sides, in this time Paul Gossman and Alan Mandel taking Vinny’s place.

The sides_I LostMy Baby/Gone. Were released in 1963 on the Eddie’s Gries label (Relic Records owener) out of New Jersey Eddies Records without success. 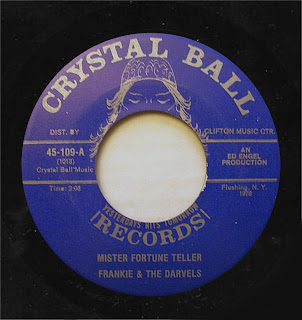 Later the group added as an extra member to Frank Lyndon(Frankie was the replacement for Carlo in The Belmonts in May,1962) and recorded with music and acappella two sides_Mister Fortune Teller/The Last Goodbye.these tunes were unreleased sides finally released in 1978 for Crystal Ball Records under the group name of Frankie & The Darvels.

Posted by Whitedoowopcollector at 6:37 AM