THE FOUR TOWNSMEN_It Wasn't So Long Before 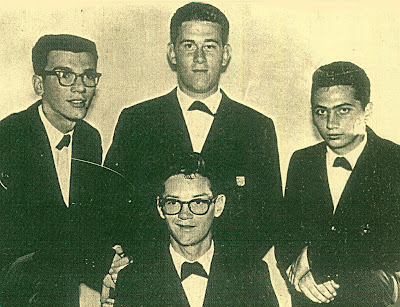 The Four Townsmen story begings in 1959, in Canonsburg,Pittsburgh when several remaining members from two inactive vocal groups The Continentals and The Alzons joined together; Chuck Marshal(Lead),Pete Kouklakis(Tenor),Lou Gadani(Bass) and Bob Kraushaar(Baritone).
The group soon appearing at numerous record hops throughout the area and in 1960 they were booked on the same show at the Canonsburg armory with The Lettermen. 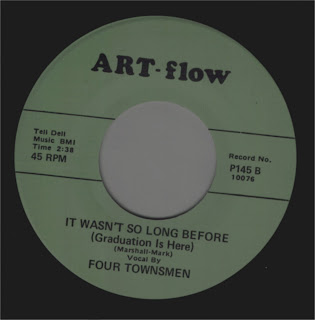 In 1962 The Four Townsmen were contracted by record producer,Ordell Bailey.Ordell arranged for an recording session where the group recorded the B side of_At The Hop.by Danny & The Juniors_Sometimes(When I'm Alone).and their original tune written by Marshall and friend Alan Mark_It Wasn't So Long Before(Graduation Is Here).the songs were coupled and released in 1962 on the Art-Flow label(Later reissued in 1963).

Sometimes.had been success in New york and along the East Coast,the group working an assortment of different clubs and organizations.
The beginning of the end for the group ocurred in September of 1963 when Gadani left the group to join the Peace Corps.the trio continue singing but in November when Kraushaar joined the army the group finally disbanded.

Posted by Whitedoowopcollector at 12:17 AM