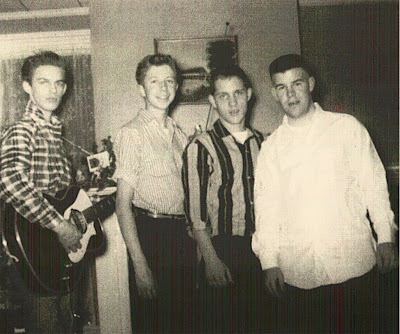 They were a vocal group with only one instrumment assambled to the group. They practice with_Get A Job. Of The Silhouettes_Book Of Love. Of The Monotones and many of The Del-Vikings stuff. That’s were they got the “DEL” in their name of The Del-Tones.

The guys participe in one Dick Curless Show at the Brewer high school auditorium as well as in one Arthur Godfrey talent show in New York(they won the contest) and singing in local shows with groups as The Five Buddies.

Bobby King wrote the song_Laura Lee. for one girl in his class,auditioned for Event records but never recorded.the group stayed together until 1960.Adrian and Jim singing occassionally with another local group The Statics(see in this blog).

Posted by Whitedoowopcollector at 12:31 AM