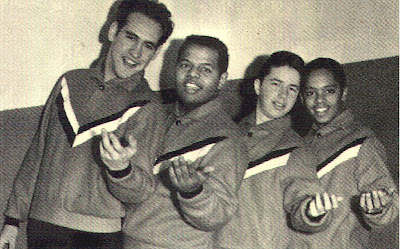 They Appeared on Ted Mack Original Amatuer Hour and Won when by internal problems Weil leave the group this singing as a quartet and change their name to The Cavaliers.

In 1957 Junie Smith join the group when they were discovered by Ed Portony Of Ivy Records he had them sing a contract with Ivy and scheduled them to record.Under the supervision of Mr. Portony the group recorded several demos as_Bench Of Love/Dance Dance Dance/I Found a Girl/Angel...many of they written by Stevens. 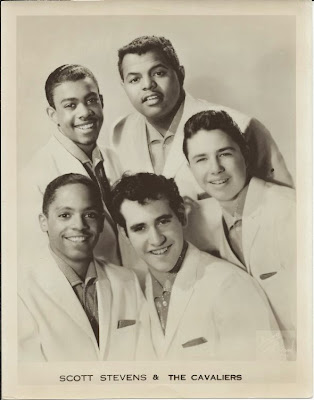 Mr. Portony sold the masters to ABC Paramount's new subsidiary label APT Records and this release in 1958 the sides_Dance,Dance,Dance/Play By The Rules Of Love.

The A Side_Dance,Dance,Dance was number 1 in New England and sold 250,000 copies.

They have the 1958 unreleased sides_Angel / Bench Of Love /You're Only Young Once /Too Long Ago / I Like Girls /I Found A Girl /Power Of Love /Loved In Vain /Gone Is My Love /I Wonder.


On their second APT release_Sunday In May/Why Why Why.Scott Stevens & The Cavaliers appears on the record's due to Steven's intention to eventually go solo.the other members were quite perturbed at this news and the group soon disband.