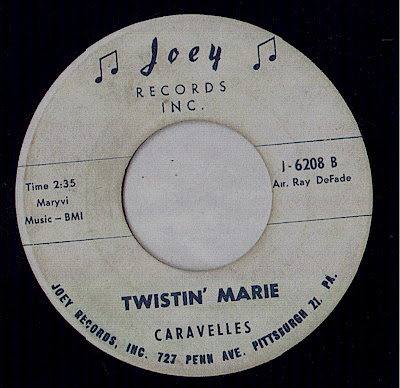 Group formed in the late 50’s by Chuck Townsed,Jim Marshall and Bill Chippich from the Garfield and Bloomfield sections of Pittsburgh.singing in various social halls and soon add three new members John Kinkle as guitarist,Joe Palmiere and Fran “Jay” Sinkovich.


In 1961 the group signed Dick Romano as their manager who send the group to Joe Tomino owner of Joey Records,he signed the group and this have a recording session at Gateway Recording studio in Pittsburgh where recorded five songs. 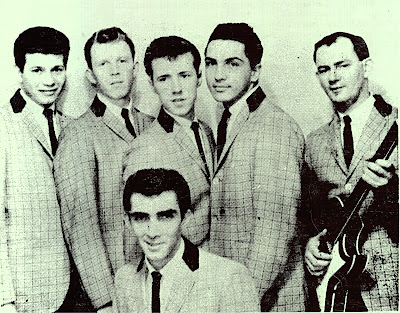 In October of 1962 the Joey’s label released_One Little Kiss(originally recorded by The Keytones) and the original side_Twistin’ Marie.

The record was very popular locally and the group have many life perfomances in Pittsburgh and out in the suburban area.

In May 1963 Joey’s released_Fallin For You/Shake Baby. Two original tunes but without any success.

The Caravelles have the unreleased sides _Chapel In The Moonlight.
Posted by Whitedoowopcollector at 12:00 AM