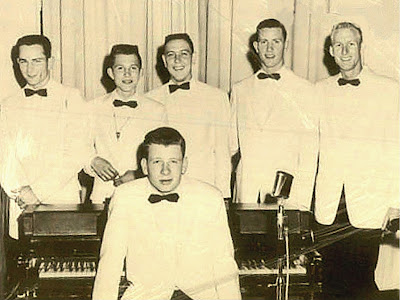 Another R&R Band this from Luling in Texas.

They recorded for the Texas Sarg label owened by Charlie Fitch...

-It's Goodbye And Not Goodnight/El Rancho Grande-1960.

Read a brief bio about they...

Clyde Wallace of Luling, Texas assembled some local musicians together in 1958 for the  sole purpose of auditioning some of his original songs for Charlie Fitch and Sarg Records.  Fitch told them they had potential, and if they stuck together as a group to come and see  him again in six months. Wallace, along with Jimmy Bazar (lead guitar, vocals), Ross  Whiteside, Jr. (tenor saxophone), Fred Frazier (rhythm guitar), Larry Voight (bass) and  Alvin Smith (drums), began working together soon afterward as a result of this informal  meeting. The Moods recorded their first session on June 1, 1959, at ACA. Little Alice,  written and sung by Wallace, was pure teenage rock ‘n’ roll with sax and sold all of  the 1,000 copies that Fitch had pressed on Sarg 162. "Easy Going"/"Duck Walk" (Sarg  176) follow in 1960 before the release of the terrific rocker "Let Me Have Your  Love" sing by Jimmy Bazar (Sarg 179).They went on to release two other records on Sarg 184 and 185  in December 1960. From the late 1950s, through the late sixties, The Moods were one of  about three bands that dominated the teenage market in South Texas selling  out virtually every dance they played for nearly a decade. After leaving Sarg in 1961, they  continued to record for labels like "TNT" and "Renco" in San Antonio and "Kool" in  Houston. They underwent many shifts in personnel over the years, until by the 1970s none  of the original members were still in the group. Wallace recently retired from teaching and  coaching and currently manages the Luling Municipal Golf Course in Luling, TX.

The Moods Home Page;
http://www.theoriginalmoods.com/
Posted by Whitedoowopcollector at 12:27 AM