THE THREE VALES_Blue Lights Down Low 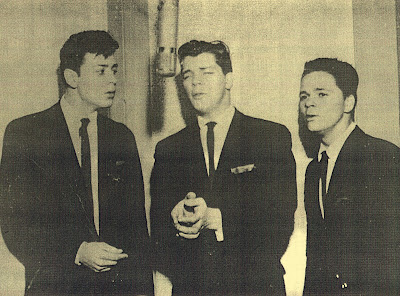 In 1956 three native guys from the Pittsburgh suburban city of McKeesport emerged to sing Ron Blair his brother Richard and a friend named Dick Sedlock they were know as The Three Vales.

Their manager was a black man named Lou Robinson who send the group to local Pittsburgh disc-Jockey Jay Michael a participate in the Jay's famous records hops.with the help of Jay the group contacted with Goldie Goldmark who made a New York audition for the group.Goldie liked the group and send the guys to Gale Records owened by Moe Gale for a recording session in this the group was tutored by Otis Blackwell. 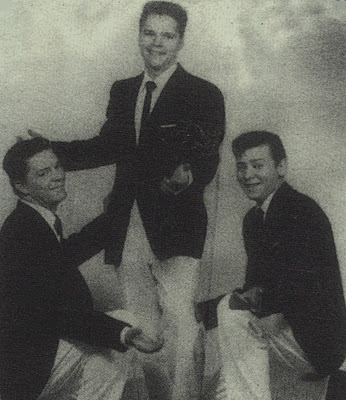 The sides_Sure Nuff/Rock-A-Billy Blues. were recorded on February 1957 and released on June by Coral Records as by Dick Vale & The Three Vales.the A side have a big local acceptacion and the group have many life perfomances in one of these the guys contacted with Pittsburgh disc jockey Barry Kaye who obtaining for they a recording sessiom with Cindy Records.

In this label they recorded_Blue Lights Down Low/Aye Aye Aye.(with the RCA Premier's as instrumental band) without any success in the charts the group continued making appearances around the Pittsburgh area but in June 1958 the group finally broke up.

In late 1960 Ron Blair,Dick Sedlock and a new member Mike Salvi reformed the group and recorded a demo_Bewitched. with an update version of_Aye Aye Aye. but these sides never were released by any label.they made appearances at many radio and local clubs but by the end of 1961 without made another record they finally broke up.
Posted by Whitedoowopcollector at 1:44 AM

I Receive this Email with more information about the group...

I am a McKeesport area musician who knew the Three Vales back in the late 50's - early 60's. I am sending you a correction to the information on your site.

When the group reformed in 1960, they became known as just "The Vales," no longer The Three Vales. manily because they expanded to four members. As far as I know, no one has successfully documented this period of the band's history. There was a guitar player, Rudy Salvi, who now lives in Florida (his brother Mike Salvi attends our church and has never been a musician). Mike CINNA (who played in the El Caminos with me before joining the Vales), not only played drums, but also did vocal harmonies on the "Bewitched" recording that was never released, and in club performances.. I once had a copy of this on reel to reel tape, but it has long since vanished. I talked with lead singer Ronnie Blair several years ago, and he told me that Mike Cinna had passed away in California several years ago.