THE THREE CHUCKLES_In The Still Of The Night

In 1949 three kids from the Red Hook section of Brooklyn,NY. started to singing;Tommy Romano(Vocal,Guitar),Tommy"Russ" Gilberto(Lead Vocals and Bass) and Phil Benti (Vocal,Accordion).They threw around many possibles names when a woman entered the shop with their son.the kid was eating some Chuckles candy and The Three Chuckles name were born,from 1950 to 1952 they worked clubs across the country. 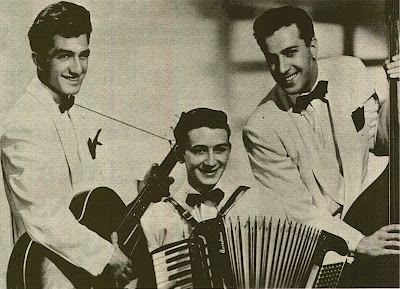 In 1953 Phil Benti decide to leave the group and Teddy Randazzo joined them as new lead Vocal and accordionist and signed Charlie Bush as their manager.their act at this time incluided a great deal of comedy in addition to their music. 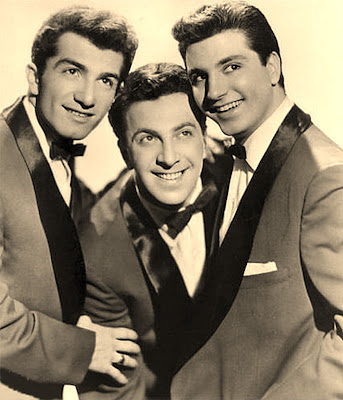 During the summer of 1953 the group recorded a tune composed by Romano_At last You Understand. and as B side they enclosed_Run Around. one tune written by Cirino Colacrai of Cirino & The Bowties fame(see in this blog).finally these sides were released on the Boulevard Records.
Run-Around. was charted #20 nationally and was number 1 in Detroit,RCA became interested in the record purchased the masters and re-released these sides in 1954 on their subsidiary label X Records.(later reissued on Jubilee Records)


The group signed with X Recods and released six new records in 1955-56 their best chart from these records was # 67 in late 1955 with_Times Two,I Love You.in 1955 the group appear in the movie Rock Rock Rock with Alan Freed and the next year in the movie The Girl Can't Help It. starring by Jayne Mansfield and Tom Ewell. 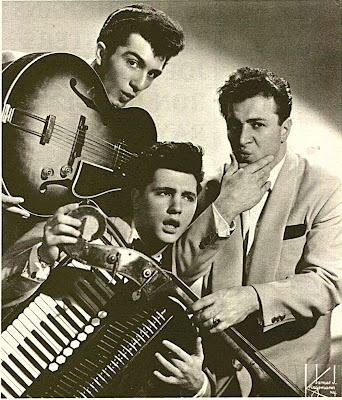 After these movies they return to the studio to cut an album for RCA subsidiary label Vik Records.

To Listen or Download_In The Still Of The Nite. from the Vik album visit;http://www.box.net/shared/9mbmi1cdvi

When the LP was recorded Teddy Randazzo left to go as a solo act,the group replaced Teddy with Jackie Farrell but they never recorded.Vik Records released three singles more of the group and charted in early 1956 #70 with the tune_And The Angels Sing.but by 1957 the group records were dead.

In 196o Teddy Randazzo have a small hit in ABC Records with the side_The Way Of A Clown.He reunited the boys and the next year ABC Records released_Runaround/Lonely Traveler.under the name of The Chuckles. 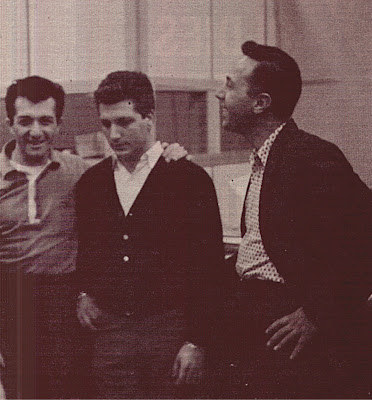 I've created a Facebook page for the "The Three Chuckles"-- my father's band from the 1950's. (I'm the daughter of Tommy Romano-- the guitar player) Please "like it" and spread the word to any golden oldies enthusiasts. I'm going to﻿ present the page to my Dad for his 81st birthday on June 9th. Best, Noelle Romano

So, what vocal group backs Teddy in "Next Stop Paradise", and who are the guys standing behind him in that movie Mister Rock and Roll?