Thanks to Marvin for send me this Link... 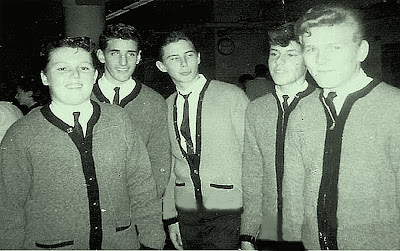 Steve,Al,Neil,Frank and Gary were five teenage guys from Queens, New York got together in the early 1960's and formed The Chants.

Singing Doo-Wop, they wowed the local girls and "fought it out" in many battle of the groups (very popular back then in Queens). Their friend, Jim, played guitar accompaniment and also recorded some of their performances in his garage with a vintage (even then) mono tape recorder and a single microphone. 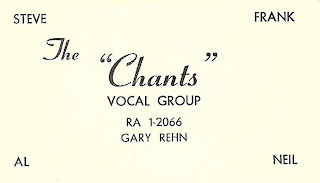 Recently, Jim rediscovered those tapes. Although they were in pretty tough shape, today's technology allowed him to rescue fourteen of those performances. The remastered songs are presented here for you older "kids".

Posted by Whitedoowopcollector at 7:41 AM