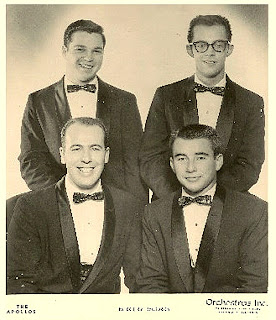 This band from Palm Beach County in Florida formed by front row: Mike Starita and Frank Nagy,back row: Jim Tolliver and Dave Chiodo(from 1960 to 1963 the band have several members change). is present in The Complete Book Of Doo Wop with two instrumental sides_Just Dreaming/Rockin' Horses. recorded in 1960 for Mercury Records.

Also they were present in the Kreiter's guide with two songs co-written by Dave Chiodo and Rocky Hart in 1961 for Glo Records_Walk By Myslf/I Found A New Girl. This was the band's first release with vocals.

Anyone have these two songs?.
Posted by Whitedoowopcollector at 3:32 AM