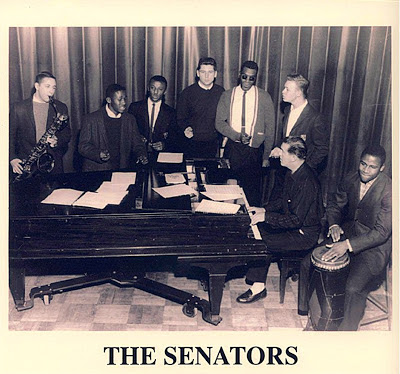 The Senators were an interracial group from Gary,IN with Delroy Bridgeman on Lead managed by their choral club director Mr. Croxton who send the group to Bristol Records out of Hammond,IN where in 1959 recorded the sides_Sheming/Tafu. the disc have a good local acceptacion and the guys appeared on the Jim Lounsbury Dance Show.

In this 1959 the group participe in a talent show in their hometown for a recording contract for Vee Jay Records,the group won and relesed a new single_It Doesn't Matter/Julie. on the subsidiary Vee Jay label Abner Records.The recording have a good local air play and the group singing in many local shows but disbanded when the boys graduate.
The group have unreleased sides as_Till Forever More. from their 1959 Vee Jay recording session.

Bio of the group at;http://www.soul-source.co.uk/soulforum/topic/107931-senators-valiants-world-column-new-world-interview/