THE SIGNATURES_Julie Is Her Name 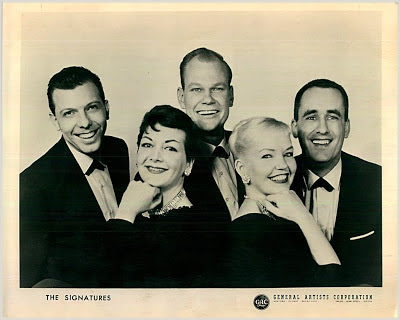 This vocal group from Seattle,Washington is present in the doo wop guides with....

Formed in 1954 at the Servicemen’s Center in Seattle, Washington, USA, the Signatures featured Cathi Hayes (lead), Lee Humes (tenor), Ruth Alcivar (alto), Jerry Hayes (baritone) and Bob Alcivar (bass). Their style, as well as being made notable by the presence of two female singers, was distinguished by a pronounced lean towards jazz as well as doo-wop. They were also proficient on several instruments: Cathi Hayes (vibes), Ruth Alcivar (drums), Humes (bass), Bob Alcivar (piano) and Jerry Hayes (guitar). Their first major performance came in front of a big-band jazz ensemble created by local disc jockey Norm Bobrow, and thereafter, they continued to feature prominently on the jazz circuit. After a year of such pursuits the Hayes siblings were replaced by Bunny Phillips on lead, and multi-instrumentalist and former Four Freshmen member Hal Kratzsch as bass singer. Their recording debut came in July 1956, when an album was recorded for Whippet Records. 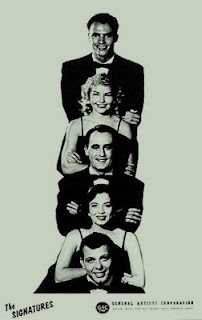 The resulting collection sold steadily, as did the accompanying single ‘Julie Is Her Name’. Engagements at prestigious New York jazz nightclubs followed, where Count Basie became a fan. He encouraged Morris Levy of Roulette Records to sign the still young band, but they stayed instead with an earlier mentor, Stan Kenton, who brought them to Warner Brothers Records. A second album attracted further good notices, and was used as the launch pad for coast-to-coast tours playing with prestigious jazz artists including Dizzy Gillespie. Phillips was replaced on lead by Dottie Dunn just as the album was released, and Don Purdy also stepped in for Humes. Their next project was a tribute album to Duke Ellington and Billy Strayhorn, but this was never completed. Instead, they issued Prepared To Flip before appearing at the Playboy Jazz Festival in Chicago. However, the advent of rock ‘n’ roll in the 60s proved to be their nemesis, and after several more tours they finally folded. Most of the ex-members retired to day jobs, though Cathi Hayes recorded a solo jazz album. Bob Alcivar and his wife Ruth moved to Los Angeles where he still works as a film composer and she as a painter.