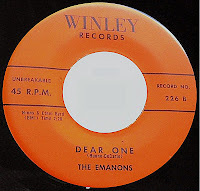 In 1957 Mike Buono and Jim Danella formed a vocal group,The Alphabetones in the Alexander Hamilton vocational high school in the Bensonhurst secction of Brooklyn,when this broke up Mike and Jim decided to form another group THE EMANONS( no name backwards) consisted of Jim Danella(Lead),Joe Buono(Tenor),Phil DeVito(Baritone) and Mike Buono(Bass).They singing at local proms,hops,dances and school contests.

Mike write one song_Dear One. and the group auditioned for Paul Winley( Paul’s brother Harold singing with The Clovers) of Winley Records.the label dedicated to the black groups signed this white group and in 1958  released the sides_Dear One/We Teenagers. After of the recording session Phil left and was replaced by Tom Sfraga.

The recording have a big local acceptacion and the ABC label from New York City buy the master for the national distribution but the original writter of B Side_We Teenagers. Claimed that it was stolen from him and the ABC label “kill” the record.

With the disappearance of their first recording the group signed with Connie Records where recordesd_Connie/Buzz Buzz. But the label never released these sides.

In 1960 changed their name to The Splendors recorded some demos with Sgt. Barry Sadler(RCA Records) and finally in the mid 60’s singing as The Lynbrooks(by Brooklyn if the two syllabes are reserved).