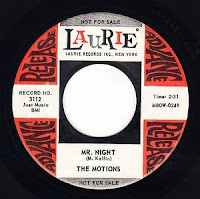 They cut a demo_Mambo City. and began appearing at record hops and social clubs but in this time Richie left the group and was replaced by Eddie Povenelli. In 1961 they signed Marv Kalfin as their manager who had written two songs_Mr. Night/Make Me A Love.

The group recorded the songs and Marv present the demo to Laurie Records who in June of 1961 released the two tunes under the group name of THE MOTIONS (by the prior existence of another  Emotion’s group name).

With the 1961 Dion Dimucci and the Jarmels hits on Laurie Records the label give a little promotion to the disc and this only was played locally,the group became disgusted and disbanded soon.

In 1963 Tommy Tucker singing with The Splendors(see in this blog).