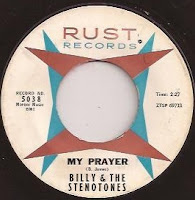 Billy James (Real Name;Bill Nosal) was a graduate of Glastonbury, Connecticut’s high school and at the age of 16 wrote_My Prayer. Backed with_Phillips. released on the New York City label, Rust Records in 1961 as Billy James & The Stenotones.

The disc was on the local charts for 13 weeks in the fall of 1961 and reached a high of 2. The Stonotones were guitarrist and co-owner of M.Z. Records Mickey Moroni’s daughters with two of their friends from the steno pool at the local Connecticut power company.

In 1962 Moroni’s recorded Billy in his label M.Z. Records with the sides_Meant For Me/”It’s The Twist”. In this time backed by the white vocal group from the New Britian,Connecticut, The Crystal Tones.

-It's The Twist. is a sound-a-like_Runaround Sue. Tune.

The record was very popular and Billy toured the Northeast dong shows at The Bushnell and tons of record hops with radio station DJ's such as, Dick Robinson, Ken Griffin, Bud Stone, and numerous others. Many TV appearances followed including, Brad Davis, Tom Vatter, Dick Gallant and others.

In 1963 joined the band, The Reveliers. Managed by Ron Laundry of WDRC and later of Hudson and Laundry fame and they enjoyed some chart success with Lawn Records.

In the mid sixties he pounding the streets of New York hawking songs in the Brill Building. Some of the Billy’s material were recorded by The Angels and Bernadette Carroll among others.
Posted by Whitedoowopcollector at 12:00 AM