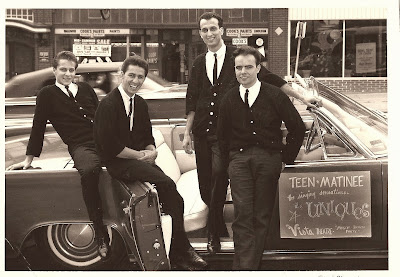 Don Orlando began his singing career in the 1960′s with a Kansas City vocal group called the Uniques.

They sang hits from the Drifters, Belmonts, Duprees, and the Skyliners. By 1964 the Uniques were one of Kansas City’s favorite vocal groups and started opening up for acts such as Chuck Berry, Dave Clark Five, Coasters and Ray Stevens.

In the 1970′s Don founded the band called Sound Express who continued playing hit’s of the 60′ & 70′s.  Today, Don continues to entertain people with his great vocal ability singing some of the greatest hits of all time from, Frank Sinatra, Dean Martin, and Bobby Darin.

Posted by Whitedoowopcollector at 4:17 PM